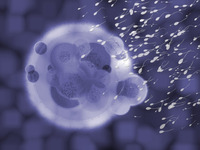 It’s exhausting being a sperm. Having made the long-distance swim up the fallopian tube, a sperm must then rev up its tail to propel itself through the thick jelly-like coating of the egg. The female hormone progesterone, released by the egg, prompts the tail to switch from a smooth swimming motion to a frantic flicking, but exactly how has been puzzling. Researchers have now shown that the hormone acts directly on a sperm surface protein, a discovery that may suggest new nonhormonal contraceptives.

For 10 years, researchers have suspected that progesterone, which the egg releases in huge quantities, is responsible for the asymmetrical, whiplike tail movements that give sperm enough torque to penetrate the ovum. Because sperm respond to progesterone within seconds, scientists reasoned that the hormone must bind to a surface protein and not one within the cells, which would take longer for the progesterone to reach.

In 2001, researchers hoped they had found the progesterone receptor when they discovered that infertile men and mice sometimes had mutations that disrupted a protein, called CatSper, which ferries calcium ions in and out of sperm. This so-called calcium channel is found exclusively within sperms’ tails, but working out whether it responds to progesterone proved a thornier exercise than expected. Sperm are not easy cells to work with—for one thing, they don’t stay still.

Now, two research teams have finally connected progesterone to CatSper by inserting a tiny electrode into individual sperm, a technique usually reserved for measuring the electrical signals in neurons. In independent studies appearing online in Nature today, the groups have documented the change in current inside a sperm as progesterone causes positively charged calcium ions to pass into the cell. And because a working ion channel produces a characteristic electrical fingerprint, the researchers were able to use their electrodes to demonstrate that CatSper was responsible for letting in the calcium.

Such work could ultimately explain why some men whose sperm don’t respond to progesterone have low fertility, says Steve Publicover, a physiologist at the University of Birmingham in the United Kingdom who was not involved in the two studies. Publicover notes that this breakthrough was possible because the teams perfected the electrical monitoring of sperm. Only two or three labs in the world can do this, he confirms.

The findings may prove important for explaining the 40% of male infertility cases for which no underlying cause is known, explains Benjamin Kaupp, a biophysicist at the Center of Advanced European Studies and Research in Bonn, Germany, who led one of the teams. “If we can identify the molecules involved, we can look to see if the cause of a man’s infertility is because one or more of these molecules is not working properly,” he says. Based on this work, for example, clinicians could investigate whether a man’s sperm is insensitive to progesterone due to problems with CatSper.

Polina Lishko, a physiologist at the University of California, San Francisco, who is a member of the other team that made the progesterone-CatSper connection, suggests a different outcome from the research. Current female contraceptives are hormonal, depending on progesterone or estrogen, and cause side effects such as weight gain. Lishko argues that CatSper “offers a great opportunity to develop a nonhormone contraceptive.” Once researchers have located where progesterone binds to the CatSper channel, they can look for molecules that would block this interaction, rendering sperm sterile, she explains. “CatSper channels only occur in the tails of the sperm; [such a] contraceptive would have no effect on females and only disrupt male sperm,” Lishko says.