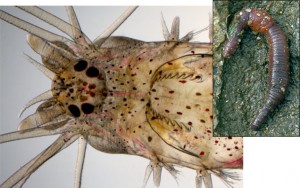 It turns out that worms really are deeply divided. In the mid-19th century, French naturalist Jean Louis Armand de Quatrefages de Bréau split worms into wigglers—which crawl and swim to their hearts’ content, such as the marine ragworm (left)—and the more sedentary, typically tube-dwelling nonwigglers, such as the earthworm (right). However, early genetic studies called this classification into question. They indicated, for example, that the wigglers weren’t that closely related to one another; instead, their physical similarities were the result of their adapting to similar lifestyles and environments. Now more comprehensive genetic evidence, reported online today in Nature, shows that de Bréau was right after all. Analyzing 231 genes from 34 different annelids, otherwise knows as ringed worms, researchers have shown that wigglers and nonwigglers do indeed represent two different evolutionary groups. What’s more, the team found that the split between the two groups happened very early in worm evolution; the exact date isn’t known because the soft bodies of worms don’t preserve well as fossils. Wigglers kept their bristled appendages for moving around and foraging, whereas nonwigglers lost them as they evolved to stay put in their burrows to eat sediments and plankton.