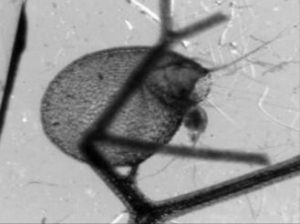 Grabbing a quick nibble between meals? Bet you can’t slurp your snack as quickly as Utricularia. These aquatic plants, commonly called bladderworts, are sustained via a root system but supplement their diet by trapping small invertebrates, like copepods, in underwater bladders. Catching this on film for the first time, researchers have discovered that bladderworts engulf prey in less than a millisecond (slowed down to a 10th of the real speed in the first part of video), making this the fastest trapping mechanism of any carnivorous plant, including the Venus Flytrap. Close analysis of the video reveals that as prey trigger hairs on a bladder, a semicircular trapdoor swings in rapidly and the walls of the bladder expand, creating pressure that sucks in water and the prey, researchers report online today in the Proceedings of the Royal Society B . The door then snaps back into place, ensnaring the small morsel, which the plant then surrounds in digestive juices. That’s a new record for fast food.