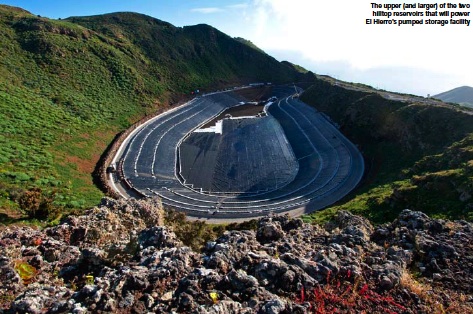 The UK’s energy prices are soaring. As gas and oil reserves run dry, the cost of energy will continue to climb. But what if we could wean ourselves off fossil fuels and make the jump to clean, renewable energy?

This is exactly what a small island off the coast of Africa plans to do. With a population of 11,000 people, El Hierro is building a solution to its mounting energy costs. As the most remote Canary Island, it struggles to meet the high price of shipping oil from the mainland. But what the island lacks in fossil fuels it makes up for in wind – over 3,000 hours a year of gusts blowing fast enough to propel windmills and generate
electricity.

And on the rare windless day, El Hierro hopes to bridge the gaps in its electricity supply with the ultimate energy cache: a 500,000m cubed reservoir some 700m up inside the island’s dormant volcano. When the power supply dwindles, the reservoir
can be drained downhill through turbines to generate electricity. 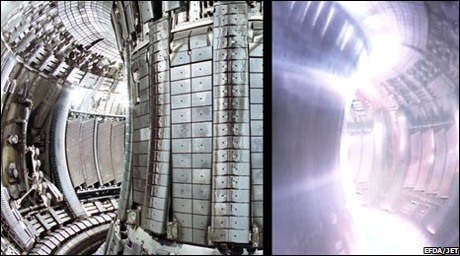 Scientists say an understanding of how the Twin Towers collapsed will help them develop the materials needed to build fusion reactors.

New research shows how steel will fail at high temperatures because of the magnetic properties of the metal.

The New York buildings fell when their steel backbones lost strength in the fires that followed the plane impacts.

The principal scientist at the United Kingdom Atomic Energy Authority (UKAEA) said one of the first applications for these better performing metals would be in the wall linings of fusion reactors where temperatures would be in a similar range to those experienced in the Twin Towers’ fires.

The key advance is the understanding that, at high temperatures, tiny irregularities in a steel’s structure can disrupt its internal magnetic fields, making the rigid metal soft.

At room temperature, the magnetic fields between iron atoms remain regular, but when heated, these fields are altered allowing the atoms to slide past each other, weakening the steel.

“[The steel] becomes very soft. It is not melting but the effect is the same,” said Dr Dudarev.

He said blacksmiths had exploited this property for hundreds of years – it allows iron to become pliable at temperatures much lower than its melting point.

The peak in this pliability is at 911.5C, but begins at much lower temperatures, at around 500C – a temperature often reached during building fires.

The steel backbone of the Twin Towers was probably exposed to temperatures close to this, when insulating panels – meant to protect the buildings’ structural frame – were dislodged by the impacts of the hijacked planes.

The roaring fire mid-way up the building heated the steel struts, and once temperatures rose above 500C the structure became plastic, and collapsed under the force of the floors above.

The interest of Dr Dudarev and the UKAEA is to find steels that can withstand the intense heat of being inside a fusion reactor.

UKAEA has helped pioneer fusion power – deriving energy by forcing together atomic nuclei – at Europe’s JET lab in Oxfordshire; and is now assisting the development work on the world first large-scale experimental reactor known as Iter.

The extended periods over which Iter will run means the reactor must have robust materials built into the vessel where the fusion reactions will occur.

Dr Dudarev said it should be possible to tune the properties of suitable new steels by adding a mix of other elements.

“We need to look at the magnetic properties of steel, [and] vary their chemical composition in a systematic way in order to get rid of this behaviour,” he suggests.

The way things move has fascinated physicists from Newton to Einstein. But until now few physicists appreciated how widely the laws of movement apply. From understanding how cell membranes let in proteins to how elementary particles behave at the speed of light, scientists are realising the common features – and essential differences – in the movement of matter of all shapes and sizes.

At the recent CCP2007 conference supported by the European Science Foundation (ESF), researchers describe how molecules, particles and subatomic particles move and interact with each other. Using their expertise at macroscopic scales they have developed models that explain the movement of matter at the microscopic level. “Well known equations that explain the flow of water or the movement of air over an airplane’s wing can also be used to explain the way molecules move in our bodies or how protons collide at great speeds”, says Professor Raymond Kapral, a chemical physicist at the University of Toronto in Canada.