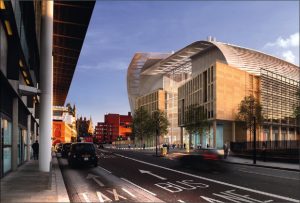 LONDON—Plans to build a £500 million medical research institute in the heart of London were approved yesterday by the key local development committee overseeing the location. The U.K. government hopes that the mammoth lab facility, construction of which should begin in the spring, will keep Britain at the forefront of global biomedical research. The approval by the Camden Town Council panel, on an 8-4 vote (with one abstention), came despite scores of registered objections, mostly by local people concerned about the loss of prime real estate previously earmarked for affordable housing.

The new facility, dubbed the UK Centre for Medical Research and Innovation (UKCMRI), will have the capacity to house 1500 staff including 1250 scientists, and it is hoped that it will attract many early-career doctors, nurses, biologists, mathematicians, physicists, chemists, computer scientists, and engineers seeking to work in a multidisciplinary institution. The four founding research organizations behind the new center—the Medical Research Council (MRC), Wellcome Trust, Cancer Research UK (CRUK), and University College London—have all contributed substantially to the funding of the building, with both MRC’s National Institute for Medical Research and CRUK’s London Research Institute intending to close their existing facilities and sell off the land to fund the new lab, which will be next to the St. Pancras train station, which has connections to the rest of Europe.

In a statement today, Wellcome Trust Director Mark Walport welcomed the council approval, saying: “UKCMRI will be a world leading institute tackling the most challenging issues facing our health and wellbeing today.” The new development, he added, is “strategically positioned amidst the cluster of outstanding research and medical institutions in Camden and close to the international transport hub at King’s Cross and St. Pancras.”

The center, set to begin its work in 2016, has outlined a number of strategies to engage the public in its work and will provide educational benefits to schools locally and nationally. “We look forward to working closely with the Council and the local community to develop the Institute, which will complement the regeneration of the local area and bring to it tangible benefits,” Walport states.