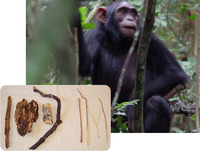 In the tropical rainforest of Uganda’s Kibale National Park, a young female chimpanzee seems to have adopted a stick. She’s holding it close to her abdomen and carrying it with her everywhere she goes. In a new study, the first to document this behavior in the wild, researchers argue that stick cradling may be akin to human children playing with dolls. And because the team observed it far more frequently in female chimps, the findings suggest that certain gender-specific behaviors are hard-wired.

Making the observations was no easy task. Harvard University primatologist Richard Wrangham and colleagues spent 12 hours a day—much of it crouched behind vegetation—tracking a group of 68 chimps through thick rainforest. During the study period, they observed about 300 instances of chimps picking up sticks. In 40% of cases, the chimps cradled the sticks in the crook of their arm or tucked between their abdomen and thigh (see picture), whereas the rest of the time they used sticks to probe trees and fight each other. More than three-quarters of the stick cradlers were female, the team reports online today in Current Biology. Females were also 10 times more likely to use the sticks as tools than males were—the first time such a large disparity has been reported.

Wrangham says stick cradling reminded him of doll play in girls. And because chimp mothers don’t play with sticks, young female chimps probably aren’t learning the behavior from watching their moms. Instead, it may be hard-wired. Given the close evolutionary relationship between chimps and humans, the implication is that doll playing and other gender-specific behaviors seen in young human children may be hard-wired as well, he says.

Rebecca Jordan-Young isn’t willing to go that far. A sociomedical scientist who studies sex, gender, and sexuality at Barnard College in New York City, Jordan-Young says she doesn’t think anyone should draw sweeping interpretations about innate differences between the sexes from this study. She says that the researchers cannot rule out that females carry sticks because they are mimicking the behavior of other adolescent females. It could also just be a cultural fad.

In addition, Jordan-Young questions the emphasis the authors placed on the doll-carrying observations. Just as intriguing, she says, is the fact that female chimps use tools much more often than males do. But those types of findings, she says, don’t grab headlines.