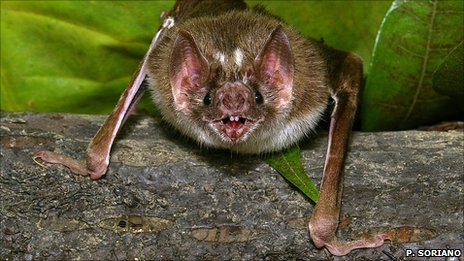 Scientists have identified the heat-sensitive facial nerves used by vampire bats to detect their next meal.

The nerves allow bats to pinpoint where the blood flows closest to their prey’s skin so they can feed more efficiently.

Vampire bats are among a handful of animals that use infrared sensors to locate their next meal, but are unique in the way they do it.

The findings are reported in the journal Nature.

Native to Central and South America, the Common Vampire Bat, Desmodus rotundus, needs to take a sanguineous slurp every night to survive.

Researchers believe that the bats rely solely on detecting their next meal in the dark by listening out for their prey’s breathing.

Having located a prey individual the bats crawls along the ground and onto the animal.

Once atop their prey, the bats are capable of using their heat-adapted nerves in their upper lip and nose to detect blood up to 20cm under their prey’s flesh.

The new finding has pinpointed the molecule that is responsible – heat-sensitive TRPV1. TRPV1, a protein, usually helps animals detect dangerously high temperatures (those over 43 degrees C), but in the bats, some of the TRPV1 molecules have been mutated into a version that is sensitive to lower temperatures, those around 30 degrees C.

Lots of blood-sucking animals search out their next meal using heat-detecting molecules, but they all seem to do it in a different way, said bat biologist, Brock Fenton from the University of Western Ontario, who was not involved in the work.

He said that perceptual world of bats undoubtedly has many more intriguing secrets.