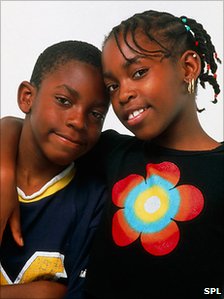 Single babies born to mothers of twins tend to be heavier, report scientists.

The report in the journal Biology Letters is based on a 40-year data set collected in The Gambia.

Mothers with twins were found to give birth to heavier babies, but the study found a similar trend even among single babies born before twins.

Twin pregnancies are risky for both mothers and offspring, and the study suggests heavier, healthier single children may offset those risks.

Worldwide only 13 in 1,000 babies are born a twin, although this rate is higher in developing countries.

Researchers interested in probing the twinning question further have had to rely on the few long-term data sets collected in parts of the world where birth rates are higher, and there are therefore more twinning events.

Evolutionary biologist Ian Rickard from the University of Sheffield in the UK, saw an opportunity to do just this when he learned of a long-term data set from The Gambia, which included not only birth weights of about 1,900 babies born to around 700 mothers, but also the number of twins.

Analysing all 40 years, Dr Rickard explained that he and his Gambian and London-based colleagues saw that women who produced twins gave birth to heavier non-twin babies.

The exact differences, however, depended on when those single babies were born.

The Gambia experiences regular variations in food supply, from a “harvest season” between January and June, and a “hungry season” for the rest of the year.

Single babies born during the harvest season before twins were on average 226g heavier than those from non-twinned families; those born after the twins were 134g heavier.

However, single children born into twinned families in the hungry season showed no discernible difference in average weight from those of non-twinned families.

“We’ve known for quite a while that… if a [foetus] is exposed to a period of the year between about July and October during their third trimester, they tend to have lower birth weight,” said Dr Rickard.

The assumption is that the stress of food scarcity swamps the heavier-baby effect found in the harvest season.

However, he stressed the “importance of replicating this [finding] in another population to see if this pattern holds up”.

He suspects that a hormone called IGF, which has long been linked to birth weight in humans, could be responsible for this pattern.

IGF is known to influence the growth rate of foetuses, and is implicated in the “polyovulation” that leads to multiple births.

In cattle, IGF levels tend to be 1.5 times higher in the cows who give birth to twins, and in mice high levels of the hormone are linked to larger litters.