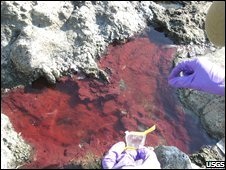 In the warm, bubbling pools of Mono Lake in California, scientists have isolated a bacterium that fuels itself on arsenic.

Combining light and arsenic, these bacteria make their food and multiply using a chemical that is toxic to most other life forms.

The researchers think using arsenic as an energy source was a process used by ancient bacteria.

Their findings are reported in the journal Science.

Ronald Oremland of the US Geological Survey explained that these bacteria are photosynthetic, using sunlight – like plants – to turn carbon dioxide into food.

What is different about them is that instead of using water in this process, they use arsenic.

The US-based researchers isolated the bacterium from the lake, which lies at the foot of the Sierra Nevada.

“These lakes are fed by hydrothermal waters that leach out arsenic-containing minerals from the surrounding rocks,” Dr Oremland told BBC News.

“We suspected that these bacteria were using arsenic to make a living, so we scraped the biofilms off the rock and studied them under laboratory conditions.”

By first withholding light, then arsenic, the team showed that the bacteria required both to grow.

This the first time an organism has been found that can use arsenic to photosynthesise under anaerobic conditions, Dr Oremland believes.

He suspects that this is an ancient ability in bacteria.

“We think that bacteria were photosynthesising before oxygen was present in the atmosphere,” he said.

Understanding how arsenic is metabolised by bacteria could help scientists comprehend its damaging effects inside human cells.

Worldwide, 144 million people are exposed to toxic levels of arsenic in their drinking water.

It enters the body’s cells by diffusion; and once inside, it disrupts how they function by binding to their machinery, inactivating it, and disrupting the way energy is transported.

Long-term exposure can lead to skin disease and kidney and bladder cancer, and it is thought to stunt the intellectual development of children.

The most arsenic-contaminated regions are in India, Pakistan, and China, where soluble arsenic in ground waters is above the World Health Organization’s (WHO) suggested maximum safe level of 10 parts per billion.