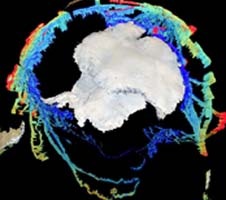 Equipped with computerised tags, the seals can reach regions of the sea impenetrable to researchers during the harsh winter months.

The data, collected during the animals’ long dives under Antarctic ice, provide the best ever estimates for the rate of sea-ice formation.

The findings appear in the Proceedings of the National Academy of Sciences.

The tags measure position, salinity, and temperature, among other things, to form a “hydrographic profile” for each of the 58 seals fitted with a device.

“By using seals, we have increased the number of hydrographic profiles 30-fold,” said Jean-Benoit Charrassin, who is based in France’s Natural History Museum.

“What we know about the Southern Ocean is very limited, which makes predicting the formation of sea-ice difficult,” Dr Charrassin told BBC News.

“These animals are filling a ‘blind spot’ in our sampling.”

Seals make excellent marine surveyors because they swim up to 100km a day and dive to depths of 2,000m (6600ft) during foraging trips.

Dr Charrassin told BBC News that seals returned to the surface to breathe about 60 times a day, spending three minutes, on average, bobbing there before descending again.

“Occasionally they stay long enough for the data loggers, atop their heads, to send the data via satellite,” explained the Paris-based researcher.

“On average, we can collect two profiles a day from each seal.”

Dr Charrassin said that by measuring the salinity of water beneath sea-ice, researchers could determine how quickly it formed.

“In the Antarctic, when seawater freezes to form sea-ice, the salt – usually suspended in the water – is ejected into the water beneath the ice,” he explained.

Previous measures of sea-ice – calculated by measuring the distances drifted by buoys over a three-week period – estimate that in August, it forms at a rate of 8-10cm (3-4in) per day.

Data collected by the seals allows better estimates and suggests that this rate is much lower – only 1cm (0.3 inches) per day.

Estimating the rate of formation of sea-ice is crucial to understanding ocean currents.

This super-salty water forms a dense layer below the ice and sinks.

The dense water then flows along the sea bottom into the ocean basins, forming part of the thermohaline circulation, a large-scale ocean current driven by global temperature and salt gradients.

This current helps redistribute energy and nutrients in the world’s oceans.

In the long-term, the researchers hope to continue using seals to help them monitor salinity levels in the Southern Ocean, and study the impact of global sea temperature changes on ocean currents.

But what about the “furry oceanographers” themselves; what can tagging seals teach scientists about seal biology?

The data loggers, as well as measuring the seals’ environment, record diving depths and time spent at the sea-bottom, giving researchers a window into the seals’ deep-sea foraging behaviour.

“We wanted to understand the foraging ecology of elephant seals and study their role in the marine food web,” said Dr Charrassin.

“We think the seals [at the bottom] try to catch deep-dwelling animals like squid and fish – at these depths, the seals’ lungs and body can be compressed to overcome the great pressures at 2,000m,” he said.

Differences in foraging behaviour might explain why the island populations of elephant seals on Kerguelen and Macquarie have seen large declines, while the 400,000-strong South Georgian population has remained stable since the 1950s.

The seals’ hydrographic profiles give more weight to this idea, showing that animals from Kerguelen generally feed on the Antarctic continental shelf, while South Georgian seals tend to feed in open ocean.

Further study into prey numbers in these different environments is needed to confirm the role of foraging behaviour in the decline of two of the three seal populations.

The research is a collaborative effort involving scientists from Europe, Australia and the US. It is part of the Southern Elephant Seals as Oceanographic Samplers (SEaOS) project that has been running for four years.

The scientists stress the animals are not bothered by the data loggers carried on their heads. The boxes are glued on to the fur of the seals and stay there for one year, until the animals moult.