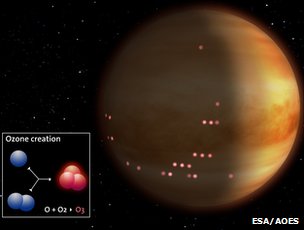 Scientists have discovered that Venus has an ozone layer.

The thin layer, hundreds of times less dense than the Earth’s, was discovered by the European Space Agency’s (Esa) Venus Express craft, researchers report in the journal Icarus.

Until now, ozone layers have only been detected in the atmospheres of Earth and Mars, and the discovery on Venus came as a surprise.

The find could help astronomers refine their hunt for life on other planets.

The European spacecraft spied the ozone layer when focusing on stars through Venus’ atmosphere.

The distant stars appeared fainter than expected, because the ozone layer absorbed some of their ultraviolet light.

The paper’s lead author Franck Montmessin, of the LATMOS atmospheric research centre in France, explained that Venus’ ozone layer sits 100km up; about three times the height of our own.

The ozone – a molecule containing three oxygen atoms – formed when sunlight broke down carbon dioxide in the Venusian atmosphere to form oxygen molecules.

On Earth, ozone, which absorbs much of the Sun’s harmful UV-rays preventing them reaching the surface, is formed in a similar way.

However, this process is supplemented by oxygen released by carbon dioxide-munching microbes.

Speaking of the international team’s find, Hakan Svedhem, ESA project scientist for the Venus Express mission, said: “This ozone detection tells us a lot about the circulation and the chemistry of Venus’s atmosphere.

“Beyond that, it is yet more evidence of the fundamental similarity between the rocky planets, and shows the importance of studying Venus to understand them all.”

Some astrobiologists assume that the presence of oxygen, carbon, and ozone in an atmosphere indicates that life exists on a planet’s surface.

The new results negate that assumption – the mere presence of oxygen in an atmosphere is now not enough evidence to start looking for life.

However, the presence of large quantities of these gases, as in the Earth’s atmosphere, is probably still a good lead, the scientists said.

“We can use these new observations to test and refine the scenarios for the detection of life on other worlds,” said Dr Montmessin.