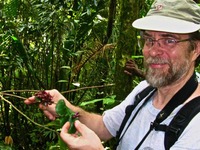 This year’s Crafoord Prize has gone to Finnish ecologist Ilkka Hanski of the University of Helsinki for his contributions to understanding the impact of habitat fragmentation on species’ survival. Although Hanski has spent much of his time as a field biologist in remote regions of places such as Borneo, Greenland, and Madagascar, the prize was awarded specifically for his development of an array of mathematical models in ecology that have had great bearing on how conservationists manage natural environments.

“Hanski is the leading ecologist of his generation; he has transformed the way we understand how ecological processes work in real landscapes,” says evolutionary biologist Charles Godfray of the University of Oxford in the United Kingdom.

Hanski has spent much of his 30-year career assessing the risk of local extinctions in environments subject to growing human influence. (Here’s a link to his Web site.) In particular, he has studied the impact of habitat fragmentation on the Glanville Fritillary (Melitaea cinxia), a European butterfly that has been declining in number over the past few decades. Hanski thanks his wife for some of his success, noting she gave him a book on Finnish butterflies for his birthday many years ago. Without this book, Hanski says, he might not have stumbled over the Glanville Fritillary, which turned out to be a perfect animal with which to examine habitat fragmentation.

The Crafoord Prize, begun 29 years ago by Anna-Greta and Holger Crafoord to honor fields that are not covered by the Nobels—alternating each year between astronomy, mathematics, geosciences, and biosciences—will be awarded in May to Hanski in Stockholm by The Royal Swedish Academy of Sciences.

Hanski says that winning the Crafoord Prize is the biggest recognition that he can imagine getting. “It shows that it is possible to do good science in small countries,” he adds. Hanski was out for dinner with a colleague when the news came, and his wife sent his son running around the local restaurants to find him and fetch him to the house, where he learned of the award over the phone. Hanski says he has not yet decided what he will do with the 4 million kroners (approximately $600,000) that comes with the prize, but he suspects that he will buy a plot of forest in Finland to save it from future development.