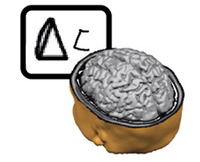 Need to improve your math skills or do your taxes faster? Try zapping your brain with electricity. Researchers have shown that administering a small electrical charge to the brain may enhance a person’s ability to process numbers for up to 6 months. The team says the approach, which it claims is harmless, could one day restore numerical skills in people suffering from degenerative diseases or stroke, and it may even improve the math abilities of the general population.

The brain’s math center appears to be the right side of the parietal lobe, a region that sits beneath the crown of the head. People with injuries to this region have difficulty counting, and it’s unusually active in young children learning their 1, 2, 3s. Those findings made Roi Cohen Kadosh, a cognitive neuroscientist at the University of Oxford in the United Kingdom, wonder if stimulating this part of the brain could improve a person’s ability to manipulate numbers.

Cohen Kadosh and colleagues recruited 15 university students and trained them to learn the value of nine made-up symbols, including shapes that looked like triangles and staples (see picture). To replicate what children go through when they first learn numbers, the researchers presented the volunteers with two symbols at a time and asked them which one had a higher value. At first, the volunteers had to guess, because they had never seen the symbols before. But as the training progressed, those volunteers who remembered their correct guesses began to learn the relative value of all nine symbols.

Each training day ended with a type of test known as a numerical Stroop task. In the classic version of the test, volunteers are shown, say, the word “blue” written in red ink and asked to state the color of the ink. Most of us hesitate for a second because we have good reading skills and want to say what we’ve read—i.e., “blue.” (You can try the test for yourself here.) In Cohen Kadosh’s version of the test, the volunteers were asked to look at the symbols they had learned—except this time, some of the low-value symbols were written larger than the high-value symbols—and say which of the symbols was larger in size. Students who hesitated were judged to have learned the symbols better than those who did not hesitate.

Volunteers who had received 20 minutes of positive electric current to their brains per day performed best on the test, the team reports online today in Current Biology. Specifically, they hesitated about twice as long as the group that received only 30 seconds of positive current. Students in the group that received 20 minutes of negative current per day were unable to recognize the symbols at all and didn’t respond. The effects of the electrical treatment were retained even 6 months later.

In addition to improving peoples’ numerical skills, electrically stimulating the brain could help patients recover word recognition and motor control after strokes, speculates Cohen Kadosh. And he adds that he sees no reason why this approach can’t be used to enhance word and numbers skills in people with normal math or language ability.

Silke Göbel, a psychologist at the University of York in the United Kingdom, cautions that although the people treated with TDCS may have altered reactions on the Stroop test, the research team has not yet directly shown this improves real-world math skills. “It is not clear whether this effect is really specific to number learning or would generalize to any new stimuli, … [but] this is obviously an important question for future studies”, she says.