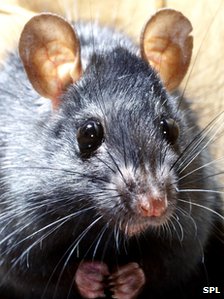 Invasive rats are compensating for the loss of native pollinators in New Zealand, scientists report.

The rats, which are responsible for devastating the native pollinator populations, are attracted to the flowers for their nectar.

The results could mean that the decline of pollinating animals worldwide does not spell the end for all native plants.

The results are published in a Royal Society journal.

Almost 90% of the world’s flowering plants are pollinated by animals.

Insect pollination alone is estimated to be worth £141bn ($224bn) each year, and according to a report from the UN Food and Agriculture Organization (FAO) bees pollinate over two-thirds of the world’s crops.

So the decline of the world’s pollinating animals has unsurprisingly sparked concerns about lower yields and serious long-term food shortages among farmers and governments.

Conservationists also predict the loss of many animal-pollinated plants.

“New Zealand offers a really interesting and rare opportunity to look at what the consequences of species extinction [are] for… pollination,” explained conservation biologist David Wilcove from Princeton University, US.

“We have this situation where almost all of the native vertebrates in New Zealand – birds, bats and reptiles – have disappeared from the North island… largely due to predation by rats,” he added.

But a small patch of pristine New Zealand woodland still exists, affording the researchers the opportunity to investigate the impact of losing key pollinating species on endemic plant species.

Dr Wilcove, and his then Princeton colleague David Pattemore, set out to study three plants: the red-flowered Metrosideros and Knightia, and the purple-flowered Veronica.

What the duo didn’t expect to see was that on the mainland, where the plants were no longer visited by traditional pollinating species, rats, and a recently colonising bird, were doing the job instead.

And for two of the three plant species, the invasive species were doing a comparable job to the native pollinators.

“I was quite startled by it,” said Dr Wilcove.

He explains that, in general, this type of compensation is more likely to happen for flowering plants that are pollinated by many different animals.

But for plants that rely on a very specialist pollinator, the loss of its sole pollinating animal still spells doom for the species.

Most crops, Dr Wilcove suspects, are pollinated by multiple species, and so there might be room for one pollinator to be replaced by another.

So for crop species, these findings should be encouraging, he suggested.

“I think this result should at least force people to think more carefully about what possible beneficial role the non-native [species] are having… and perhaps develop a slightly different control strategy,” he added.