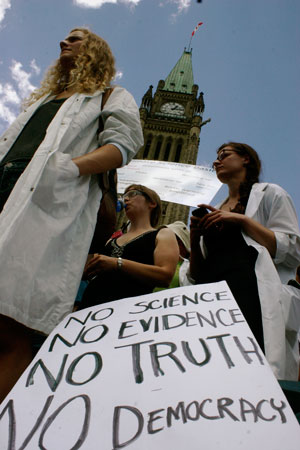 To the mournful tune of a lone saxophone scientists marched through the streets of Ottawa and onto Canada’s Parliament Hill  to protest a glut of cuts to government research labs and — they say — a lack of evidence-based decision making in the Canadian government.

The 10 July rally drew an estimated 2000 scientists, graduate students and their supporters to the sunny capital, many of them dressed in white lab coats; smaller protests took place in other cities across the country including in Regina,  Guelph and Calgary.

The protesters accuse the Harper government of shutting down Canadian scientific agencies because they threaten to expose the environmental impact of fossil fuel extraction, particularly from the Alberta oil sand,  and of mining on Canadian lakes and rivers.

“That’s a story that [Canadian Prime Minister] Stephen Harper doesn’t want you to hear,” said Maude Barlow, the National Chairperson of the Council of Canadians, an advocacy organization that works to promote green water and energy policies, in her speech outside the Houses of Parliament.

Cuts to the Canadian federal budget this year have meant the closure of various scientific programs, including the Experimental Lakes Area (ELA), a 44-year-old research station that houses a system of 58 lakes in northwestern Ontario. ELA provided the first evidence for acid rain, and diagnosed the effects of mercury pollution and synthetic hormones on aquatic life.

“Society has learned a tremendous amount [from these lakes],” said Jeff Hutchings, a biologist at Dalhousie University in Halifax and the President of the Canadian Society for Ecology and Evolution.  “It [will] be tremendous loss, and not just to Canadian society, because [the lakes] generates knowledge of importance to any country with lakes,” he told Nature.

The cuts are imminent. The first of Canadian government scientists will lose their positions at the beginning of August , and the closure of the ELA is slated for April next year.

“The government would like to have universities take over this facility, [but] in this time frame that almost certainly won’t happen…[the facility] will [therefore] presumably be moth-balled, taking with it decades of internationally renowned research,” said Hutchings.

In response to today’s protest, Gary Goodyear, Canada’s minister of state for science and technology, released a statement that claims the Canadian governments commitment to supporting science. “Our government is investing in science and research that is leading to breakthroughs that are strengthening our economy and the quality of life of all Canadians.

“While the government is returning to a balanced budget, science, technology and innovation remain a strong priority with an added $1.1-billion investment over five years,” he said.

But Ian Rutherford, Canadian Meteorological and Oceanographic Society based in Ottawa points out that the protest is not just about a failure by the government to fund science. “There is an insidious campaign to muzzle scientists, to keep science out of the news, to… make science unimportant,” he says. “I think it is wrong. The scientific community has to stand up and say this is nuts.”

One environmental scientist, Kringen Henein of Carlton University in Ottawa, told Nature: “I’m really depressed… I just became a grandmother…and what is my grandson’s country going to be like in forty years if this is the way we are going?”

UPDATE: An earlier version of this blog stated that 5000 participated in the march, according to an organizer’s count. The revised figure of 2000 is based on a police estimate. 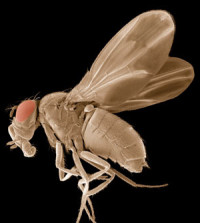 US and Canadian researchers have evolved a population of fruitflies that can count. The result, presented on 9 July at the First Joint Congress on Evolutionary Biology in Ottawa, Canada, supports the notion that the neural mechanisms underlying basic arithmetic skills first emerged hundreds of millions of years ago. It could also eventually offer a key to understanding why some people have problems with numbers.

Few doubt that our closest animal relatives have some capacity to count. A variety of clever studies have also revealed the numerical skills of more distant species, including salamanders, fish and bees. But until now, no one has ever tried to genetically enhance an animal’s counting ability.

To tackle the challenge, evolutionary geneticists Tristan Long, of Wilfrid Laurier University in Waterloo, Canada, and William Rice, of the University of California, Santa Barbara, teamed up to try to create a race of numerically savvy insects. During a 20-minute training period, flies were exposed to either two, three or four flashes of light — two and four flashes coincided with a vigorous shake administered by placing a electric toothbrush next to the box containing the flies. After a brief rest, the flies were returned to box and shown the light flashes. Despite a dislike for being shaken, most of the flies were not able to learn to associate the negative stimulus with the number of flashes. But 40 generations later, they could.

The researchers caution that the work is preliminary and that they do yet know what genetic changes are behind the insects’ evolved number sense.

“The obvious next step is to see how [the flies’] neuro-architecture has changed,” explains Long. He then hopes to look for genetic differences between control and experimentally selected flies to pin down the genes responsible for their enhanced counting ability.

Neuroscientists have long speculated that human mathematical ability is built on an innate foundation that predates language and complex reasoning. Dyscalculia, a poorly understood disorder that affects a person’s ability to learn and perform basic arithmetic operations, may in some cases be related to an impairment of this innate foundation. If so, says Long, fruitflies could help to uncover genetic links to the disorder.

“This project was really about getting people interested in using fruitflies as a model system for understanding numerical competence and its evolution,” he adds.

Cancers can resist destruction by drugs with the help of proteins recruited from surrounding tissues, find two studies published by Naturetoday. The presence of these cancer-assisting proteins in the stromal tissue that surrounds solid tumours could help to explain why targeted drug therapies rapidly lose their potency.

Targeted cancer therapies are a class of drugs tailored to a cancer’s genetic make-up. They work by identifying mutations that accelerate the growth of cancer cells and selectively blocking copies of the mutated proteins. Although such treatments avoid the side effects associated with conventional chemotherapy, their effectiveness tends to be short-lived. For example, patients treated with the recently approved drug vemurafenib initially show dramatic recovery from advanced melanoma, but in most cases the cancer returns within a few months.

Many forms of cancer are rising in prevalence: for example, in the United States, the incidence of invasive cutaneous melanoma — the deadliest form of skin cancer — increased by 50% in Caucasian women under 39 between 1980 and 2004. So there is a pressing need to work out how to extend the effects of targeted drug therapies. But, until now, researchers have focused on finding the mechanism of drug resistance within the cancerous cells themselves.

Settleman’s team tested 41 human cancer cell lines, ranging from breast to lung to skin cancers. The researchers found that 37 of these became desensitized to a handful of targeted drugs when in the presence of proteins that are usually found in the cancer’s stroma, the supportive tissue that surrounds tumours. In the absence of these proteins, the drugs worked well1. By growing cancer cells along with cells typically found in a tumour’s immediate vicinity, Golub and his colleagues showed that these neighbouring cells are the likely source of the tumour-aiding proteins2.

One of the most startling results of the teams’ experiments was the discovery that a protein called hepatocyte growth factor (HGF) boosts melanoma’s resistance to treatment with vemurafenib. Intrigued by this result, both teams looked at blood samples from people who had undergone treatment with vemurafenib, and found the higher a patient’s HGF levels, the less likely they were to remain in remission.

Martin McMahon, a cancer biologist at the University of California, San Francisco, who was not affiliated with either study, explains that the results have immediate implications for the design of clinical trials, which he says could combine targeted drug therapy with drugs capable of knocking down the production of proteins such as HGF.

“These papers show that the influence of the cell’s microenvironment is important not only for melanoma, but also for pancreatic, lung and breast cancer,” McMahon says, adding that they are “very exciting, because they expand the focus of where we should be looking for the mechanisms of drug resistance”.