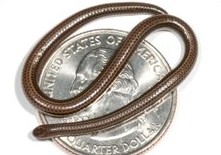 The world’s smallest snake, averaging just 10cm (4 inches) and as thin as a spaghetti noodle, has been discovered on the Caribbean island of Barbados.

The snake, found beneath a rock in a tiny fragment of threatened forest, is thought to be at the very limit of how small a snake can evolve to be.

Females produce only a single, massive egg – and the young hatch at half of their adult body weight.

This new discovery is described in the journal Zootaxa.

The snake – named Leptotyphlops carlae – is the smallest of the 3,100 known snake species and was uncovered by Dr Blair Hedges, a biologist from Penn State University, US.

“I was thrilled when I turned over that rock and found it,” Dr Hedges told BBC News.

“After finding the first one, we turned hundreds of other stones to find another one.”

In total, Dr Hedges and his herpetologist wife found only two females.

Dr Hedges thinks that the snake eats termites and is endemic to this one Caribbean island. He said that, in fact, three very old specimens of this species were already in collections – one in London’s Natural History Museum and two in a museum in Martinique.

However, these specimens had been misidentified.

Dr Hedges explained the difficulty in defining a new species when the organism is so small.

“Differences in small animals are much more subtle and so are frequently over-looked,” he said.

Modern genetic fingerprinting is often the only way to tell species apart.

“The great thing is that DNA is as different between two small snakes as it is between two large snakes, allowing us to see the differences that we can’t see by eye,” explained Dr Hedges.

Researchers believe that the snake – a type of thread snake – is so rare that it has survived un-noticed until now.

But with 95% of the island of Barbados now treeless, and the few fragments of forest seriously threatened, this new species of snake might become extinct only months after it was discovered.

Smallest of the small

In contrast to other species of snake – some of which can lay up to 100 eggs in a single clutch – the world’s smallest snake only produces a single egg.

“This is unusual for snakes but seems to be a feature of small animals,” Dr Hedges told BBC News.

By having a single egg at a time, the snake’s young are one-half the length of the adult.

Dr Hedges added that the snake’s size might limit the size of its clutch.

“If a tiny snake were to have more than one offspring, each egg would have to share the same space occupied by the one egg and so the two hatchlings would be half the normal size.”

The hatchlings might then be too small to find anything small enough to eat.

This has led the researchers to believe that the Barbadian snake is as small as a snake can evolve to be.