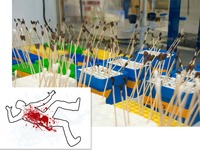 The scene at the nursing home is grim. An elderly man lies in a pool of blood on the floor of his bedroom. Detectives also find blood from an unknown individual near the door, suggesting the victim put up a fight. Was the assailant one of the octogenarian’s fellow residents, or perhaps a nurse or an orderly? The detectives have little to go on until analysis of the unknown blood reveals it came from someone in their 20s or 30s.

That’s a fictional scenario—for now. But researchers report online today in Current Biologythat they can estimate someone’s age—give or take about a decade—simply by analyzing a drop of blood. If validated, the new forensic technique could revive police investigations that have hit a dead end.

The blood-age test relies on a peculiarity of T cells, immune cells that recognize and fight microbial invaders. As a T cell develops, it cuts up some of its DNA and splices some of it back together in various combinations; that helps it generate unique cell-surface receptors that can recognize a wide variety of bacteria or other pathogens. Any leftover DNA forms a circle that is useless to the T cell.

Researchers can quantify how many circles exist in the blood, says Manfred Kayser, a forensic molecular biologist at Erasmus University Medical Centre in Rotterdam. He and his colleagues have found that the amount declines with age because the body produces fewer and fewer new T cells as people get older. “We take advantage of this waste product,” he says.

The researchers established the promise of the forensic technique by analyzing the blood samples of about 200 people varying in age from a few weeks old to 80 years old. They probed the samples with fluorescent DNA designed to bind to the excess T cell DNA fragments, allowing them to quantify those fragments in a matter of hours. The team found a correlation between the number of T cell DNA fragments and age, one strong enough to pinpoint how old a person was, plus or minus 9 years.

That may seem like a big range, but it’s enough to place suspects into generational categories, which is very helpful to police, says Peter de Knijff, head of the forensic laboratory at Leiden University Medical Center in the Netherlands. Right now, law enforcement officials armed with a blood sample can identify its owner only if they can match it to a known suspect, or if it matches DNA in a database. With this new test, and a test for eye color, also developed in Kayser’s lab, de Knijff says that at least police can narrow down their suspect pool. “This is the best we have right now.”

Kayser says that he hopes to make the T cell test more accurate by combining it with other aging biomarkers that his team is developing. He also notes that the T cell test was still accurate on blood collected a year and a half earlier. That means it could be used to resolve cold cases as well as help police identify disaster victims.

Before the technique becomes widely available to forensic teams in the Netherlands, it will need to be verified by two independent labs, says de Knijff. There are calls for this test already, he adds, in cases where the trail has gone cold and new evidence is desperately needed.

What do your text messages say about you? I investigate forensic linguistics and sentiment analysis for CBC’s Spark.

:: Listen to the full programme or just this section :: 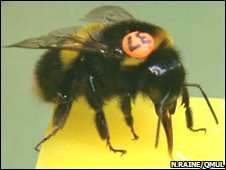 Just as bees forage some distance away from their hives, so murderers avoid killing near their homes, says the University of London team.

This “geographic profiling” works so well in bees, the scientists say future experiments on the animals could now be fed back to improve crime-solving.

The team’s work is reported in the Royal Society journal Interface.

The scientist is working with colleagues Steve Le Comber and Kim Rossmo, a former detective in the US, to tag bees with tiny coloured numbers and follow them from their nests to flower patches.

The researchers’ analysis describes how bees create a “buffer zone” around their hive where they will not forage, to reduce the risk of predators and parasites locating the nest. It turns out that this pattern of behaviour is similar to the geographic profile of criminals stalking their victims.

“Most murders happen close to the killer’s home, but not in the area directly surrounding a criminal’s house, where crimes are less likely to be committed because of the fear of getting caught by someone they know,” Dr Raine explained.

Understanding the geographic profiles of animals is interesting to biologists as it helps them predict the locations of important feeding grounds, and knowing these areas will inform more effective conservation measures.

This approach works well for very different creatures, from bees and bats to great white sharks.

But what is more unusual is that models used to describe bee foraging can be applied back to human behaviour, the researchers say.

Instead of using information about the distribution of flowers visited by bees to explain the insects’ behaviour, criminologists’ models will use details about crime scenes, robbery locations, abandoned cars, even dead bodies, to hone the search for a suspect.

“Bees have much simpler brains and so understanding how bees are recruited to flowers is much easier than understanding the complex thoughts of a serial murderer,” Dr Raine said.

More broadly, the London-based team hopes its work will lead to a better understanding of how one of the most familiar animals in nature goes about its daily business.

“Bees’ pollination ‘services’ account for about one in three mouthfuls of food that we eat as humans. They pollinate a huge diversity of our fruit and vegetable crops.

“If we don’t know how bees forage then we don’t really understand pollination, and that is quite detrimental to how we feed ourselves; which is becoming an increasing problem with bigger populations.”

The miniature tags are glued to the backs of the insects to record their movements in and out of the hive.