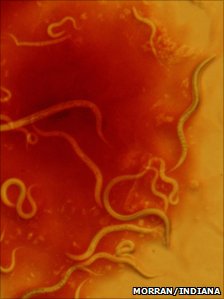 Sex gives worms the power to fight off parasites, report researchers this week in the journal Science.

Worms forced to reproduce asexually succumbed to a nasty bacterial infection and died.

The researchers say the results are the most convincing evidence to date for a key theory in evolutionary biology.

The theory holds that sex evolved because it lets organisms reshuffle their genes into new combinations to stay a step ahead of parasites.

Reproducing asexually – where organisms clone themselves – makes much more sense; there is no need for an organism to search and seduce a mate, fight off competitors, or risk contracting a sexually transmitted disease.

What is more, given that an organism has survived long enough to reproduce, it is likely to have a first-rate set of genes under its pelt.

Why run the risk of diluting these good genes with potentially poorer ones from another organism?

And yet sex exists; the vast majority of animals and plants reproduce this way.

Parasites create a situation where, in spite of the disadvantages of sex, it is good for an organism to reshuffle its genome with that of another.

This reshuffling creates offspring with new gene combinations that are potentially better than older combinations at resisting a parasite’s advances.

It takes all the running you can do, to keep in the same place

The genetic “arms race” between a parasite and its host is often refered to as an example of Red Queen-style interaction – a term coined by biologist Leigh Van Valen who summoned the image of the constantly running Red Queen from Lewis Caroll’s Through the Looking-Glass.

The analogy seemed to him fitting for describing how species must continually evolve to keep up with each other.

But despite the theory’s popularity, there has been little hard evidence for it.

Out in the field, biologists have noted that organisms are more likely to reproduce sexually when there are more parasites loping around in their vicinity.

What has been missing is a direct manipulation to organisms’ sex lives to test if it makes them more or less resistant to parasites.

Now researchers working at Indiana University in the US have used the round worm Caenorhabditis elegans to do just this.

The researchers watched the worms gorge themselves on a lawn of a nasty bacterium, Serratia marcescens, which invades the worms’ guts and from there multiplies into every crevice of their body, killing the worms from the inside.

Across five different populations, worms that reproduced sexually fared well over the 20 generations, while all animals that cloned themselves died quickly.

“What is really beautiful about these lab systems is that you can manipulate the system and show that [the theory] can work,” said evolutionary biologist Aneil Agrawal from the University of Toronto in Canada.

To do this, the team created two treatments: one used bacteria from an original stock kept in the freezer, and the other used bacteria that had lived alongside the worms for many generations and so had adapted along with them.

In essence, “the bacteria got more and more infective, but the [clonal worms] did not get more and more resistant, and that is why they went extinct,” explained lead author Levi Morran, an evolutionary biologist from University of Indiana in the US.

“I am really excited about this; I think this is really cool,” Dr Agrawal told BBC News.

“Whether this is actually happening in nature is another thing; we can’t know that from a lab system,” he explained.

But he adds that as a first step it is important to demonstrate that under conditions where you expect sex to alleviate the effects of parasites, it does.