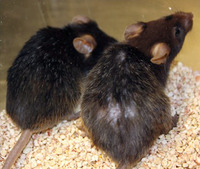 In F. Scott Fitzgerald’s short story, “The Curious Case of Benjamin Button,” an old man gets younger with each passing day, a fantastic concept recently brought to life on film by Brad Pitt. In a lab in Boston, a research team has used genetic engineering to accomplish something similarly curious, turning frail-looking mice into younger versions of themselves by stimulating the regeneration of certain tissues. The study helps explain why certain organs and tissues break down with age and, researchers say, offers hope that one day such age-related deterioration can be thwarted and even reversed.

As we age, many of our cells stop dividing. Our organs, no longer able to rejuvenate themselves, slowly fail. Scientists don’t fully understand what triggers this, but many researchers suspect the gradual shrinking of telomeres, the protective DNA caps on the end of chromosomes. A little bit of telomere is lost each time a cell divides, and telomerase, the enzyme that maintains caps, isn’t typically active in adult tissues. Another piece of evidence: People with longer telomeres tend to live longer, healthier lives, whereas those with shorter telomeres suffer more from age-related diseases, such as diabetes, Alzheimer’s, and heart disease.

Several years ago, Ronald DePinho, molecular biologist and director of the Belfer Institute of the Dana-Farber Cancer Institute, and colleagues at Harvard Medical School in Boston genetically engineered mice to lack a working copy of the telomerase gene. The animals died at about 6 months—that’s young for mice, which usually live until they are about 3 years old—and seemed to age prematurely. At an early age, their livers and spleens withered, their brains shrank, and they became infertile. By early adulthood, these mice exhibited many of the maladies seen in 80-year-old humans.

DePinho says he wondered what would happen to the aging process in these mice if they suddenly began making telomerase again. “Would [we] slow it, stabilize it, or would we reverse it?” He and his colleagues genetically engineered a new batch of mice with the same infirmity, but this time they added back a telomerase gene that became active only when the mice received a certain drug. The researchers kept the gene off during development and let these mice prematurely age, as the previous ones had. But then at 6 months, the team switched on the telomerase gene.

The burst of telomerase production spurred almost total recovery. The rodents became fertile, their livers and spleens increased in size, and new neurons appeared in their brains, the researchers reported online yesterday in Nature.

The ability to reverse age deterioration in the mutant mice indicates that the cells that divide to replenish tissues don’t simply die when their telomere clock expires, says DePinho. They apparently persist in a dormant state from which they can be revived. “One could imagine applying this approach to humans,” he says, focusing the therapy on specific tissue types such as the liver, where telomerase is thought to play an important role in regeneration after damage by hepatitis, parasitic infection, and alcoholism.

K. Lenhard Rudolph, who studies stem cell aging at the University of Ulm in Germany, says that the results are encouraging for people with diseases that cause accelerated aging, like progeria, because the mice in this study were rescued despite already suffering from the effects of chronic disease. “It is a proof of principle that telomeres are at work here.”

Drug companies and researchers are seeking ways to restore, protect, or extend a person’s telomeres, but the jury is still out on whether such interventions can slow the symptoms of aging, let alone reverse them. Telomere investigator Maria Blasco of the Spanish National Cancer Research Center in Madrid cautions that DePinho’s experiment shouldn’t raise people’s expectations of antiaging therapies just yet. “This study uses genetically modified mice,” she says. “What remains a very important question in the field is can you delay aging in a normal mouse?”