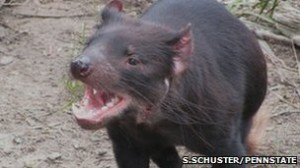 Scientists have sequenced the complete genomes of two Tasmanian devils in the hope of finding clues to preserving this highly endangered marsupial.

Devil populations have been decimated by a highly contagious facial cancer that is transferred when these aggressive animals bite each other.

The findings will help researchers select the best individuals to be kept in captivity for eventual re-release.

The research is outlined in Proceedings of the National Academy of Sciences.

The Tasmanian devil, Sarcophilus harrisii, gets its name from its high-pitch, blood-curdling squeal, and is renowned for fighting over access to animal carcases, which it grinds with the bone-crushing force of its jaws.

In 1996, a wildlife photographer snapped an image of an animal in the far north-east of Tasmania with a peculiar growth on its face.

The growth, it turned out, was neither benign, nor isolated to this one individual, but was a highly contagious, fatal cancer that seemed to be spreading through the population at lightning speed.

By 2007, conservationists reported that Devil Facial Tumour Disease, DFTD, had wiped out more than 90% of devil populations in the north-east of Tasmania, and was spreading west.A strategy to save the devil from extinction was begun.

Now, an international team of genomicists is offering a helping hand.

The researchers took advantage of the latest technology to read the genetic sequence of two devils – an uninfected male called Cedric, and an infected female called Spirit – along with smaller segments of DNA from 175 other individuals.

The team hopes to use the genomes to pinpoint which individuals should be placed into “protective custody” to wait out the cancerous epidemic before being reintroduced.

From their analysis, the scientists predicted how best to capture as much genetic diversity among the individuals put aside for captive breeding, explained lead author Webb Miller, a genomicist from Pennsylvania State University, US.

He said that choosing individuals who were very genetically dissimilar should take priority over whether they were resistant to the cancer.

The devil you know

“It is a big step forward to actually get the genome sequence from this animal… the [world’s largest] remaining carnivorous marsupial,” said zoologist David Rollinson from the Natural History Museum, UK.

Getting two complete genomes was very valuable, said Dr Rollinson, but getting as many samples as they did, from as many different animals was “just the icing on the cake”.

Dr Rollinson thinks that a similar approach could be used to study and save other endangered animals.

The researchers also sequenced one of the five tumours from Spirit’s head for clues to why the Tasmanian devils fail to recognise the cancer as “non-self”, and destroy it before it takes hold.

Understanding what it is about the devil’s immune system that makes it so ineffectual at picking up the facial cancer will not only help treat those already infected, but will hold clues about whether the cancer can jump species.

“The greatest worry is that it will jump into another marsupial,” said cancer geneticist Elizabeth Murchison from the Welcome Trust Sanger Institute in Hinxton, UK.

:: Read original here or listen to me talk about the results on the BBC’s Science in Action. 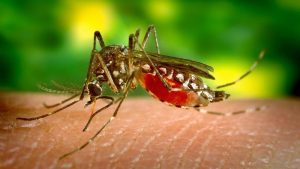 Thousands of insects are being lined up to have their genomes sequenced.

The five-year project will help researchers pinpoint vulnerable regions of insects’ genomes, which could be targeted with pesticides.

The project’s leaders hope the initiative will make a dent in the $50bn spent globally each year to control diseases transmitted by insects.

The final list of six-legged critters has yet to be finalised.

The project, called the 5000 Insect and Other Arthropod Genome Initiative, comes at a time when the costs of genome sequencing have fallen substantially and it is feasible to cheaply sequence large numbers of animals and plants.

Among the list of agriculturally important insects and other arthropods – animals with exoskeletons – to be sequenced are handfuls of bugs that act as disease vectors.

By comparing the genomes of these insects with those of their close relatives that don’t carry pathogens, researchers hope to pinpoint the genes that make one insect a disease-vector and another not.

What’s more, knowing the genes involved will help researchers better predict how insect immune systems will evolve in response to biopesticide control measures, such as Beauveria bassiana, a fungus used to control mosquitoes in malaria-ridden countries in Africa.

It is also hoped that the project will aid the search for suitable compounds for use as pesticides; ones that kill a targeted pest but leave the beneficial pollinating insects that also visit the crop plants unharmed.