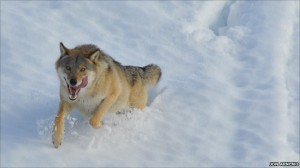 Illegal poaching accounts for over half of all deaths of Swedish wolves, suggests a new study.

Basing their estimates on long-term wolf counts, the researchers reveal that two-thirds of poaching goes undetected.

The study suggests that without the past decade of persecution Swedish wolves would be four times more abundant than they are today.

The study’s findings are reported in Proceedings of the Royal Society B.

“Many have speculated that poaching levels are high for many threatened species of carnivores,” said Chris Carbone from the Zoological Society of London.

“This study presents an important step in trying to quantify this hidden threat,” he added.

The new study predicts the size of the wolf Swedish population each year based on counts from the previous year.

These counts are based on radio-tracked wolves and the more traditional ‘footprint count’, used in Sweden for over 10 years to estimate wolf numbers.

The researchers’ estimates took account of confirmed cases of wolf mortality – such as when a wolf is killed on the road, dies from disease or is found killed.

However, when the team, based at Grimso Wildlife Research Station in Sweden, compared the expected numbers produced by their models to the actual number of wolves in the wild, they found they were over estimating the size of the population.

Conservation biologist Guillaume Chapron, and one of the team, suspects that ‘cryptic poaching’, poaching that goes undetected, accounts for this difference.

The poaching we see is the “tip of the iceberg,” he said.

The researchers predict that without the last decade of poaching, wolves would have numbered around a thousand by 2009, four times the number reported that year.

Wolves are known to kill the dogs that many Swedes use to hunt moose, and despite up to four year prison sentence if caught poaching, a few people do not hestitate to take a shot at a wolf.

Poaching is not the only threat to the Swedish wolf.

These large carnivores went extinct in Sweden in the 1970s, and the population has since re-established itself after a handful of migratory Finnish wolves took over the empty territories.

Today, all 250 or so Swedish wolves have descended from these few founding individuals.

And so the population is highly inbred and suffers from skeletal abnormalities and problems reproducing.