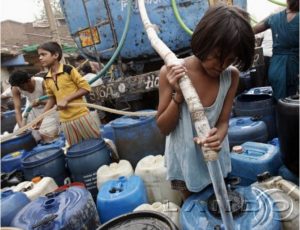 A gene that causes bacteria to become resistant to antibiotics has been found in drinking water in New Delhi, India. NDM-1 is commonly found in Escherichia coli but can spread to other bacteria thanks to their ability to swap DNA. The gene confers resistance to antibiotics, including potent, last-resort drugs called carbapenems.

India’s warm temperatures, over-crowding, and poor sanitation are likely to blame for the gene’s spread into the main water system from bacteria in people’s guts, write Timothy Walsh of Cardiff University in the United Kingdom and colleagues in a paper published online last week in The Lancet Infectious Diseases. The team, who found the gene in two out of 50 tap water samples and 51 of 171 samples taken from puddles and streams in the capital, say the gene could spread farther afield when tourists drink local water supplies and then return home.

NDM-1 has already been found in U.K. hospitals in bacteria infecting people who had medical treatment in India and those admitted with “traveler’s tummy.” The new finding raises concerns that resistant genes, so far found mainly in gut flora, are becoming widespread in natural environments, where they are highly mobile.