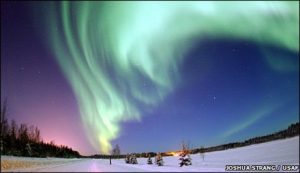 The precise spot at which a space storm struck the Earth’s outer atmosphere has been pinpointed for the first time.

These storms are caused by the bending and stretching of the Earth’s magnetic field by material from the Sun.

Observations like this may one day lead to better forecasting of these events, a meeting of the American Geophysical Union in Toronto, Canada, has heard.

This would provide more time to power down satellites and electrical grids, which can be damaged by these storms.

“If we can start to understand when and why these space storms occur, then we can try to move from short-term forecasting to long-term forecasting,” Dr Jonathan Rae, from the University of Alberta, told BBC News.

Space storms are the result of billions of tonnes of material thrown into space by the Sun in great plumes.

These plumes stretch the planet’s magnetic field like an elastic band, distorting the field from its usual circular shape to a long ellipse that reaches out behind our planet.

Eventually, when the field can stretch no further, it snaps back into place, rocketing particles into the Earth’s upper atmosphere. This causes the auroral displays known as the northern and southern lights.

It also floods the space in the planet’s immediate vicinity with radiation at such huge levels that they would endanger the lives of astronauts. This process also generates electrical surges on the ground capable of disrupting a country’s power grid.

Dr Rae led a team of scientists who took measurements of changes in the Earth’s magnetic fields using a system of cameras and magnetic instruments on the ground, while simultaneously observing the onset of a space storm from Nasa’s five-strong fleet of THEMIS spacecraft.

They saw magnetic oscillations hit the upper atmosphere in a particular location – somewhere over Canada – and ripple out across the ionosphere. These events were followed, three minutes later, by an auroral display.

Researchers hope to use these observations to better predict these events. This could lead to the forecasting of storms hours, or even days, before they occur.

This would give more advanced warnings, helping protect humans and equipment from the radiation generated by disturbances.

“In the future, we should be able to predict space weather in the same way that we now can predict long-term weather forecasts [on Earth],” Dr Rae said.

Space storms are expected to increase as the Sun approaches another solar maximum. This is predicted to occur again by 2013 – when the influence of the Sun on the Earth’s magnetic field will be greatest.

The work is reported in the Journal of Geophysical Research and is co-funded by the Canadian Space Agency and Nasa.