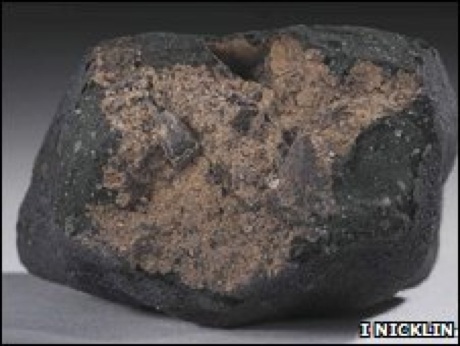 Formic acid, a molecule implicated in the origins of life, has been found at record levels on a meteorite that fell into a Canadian lake in 2000.

An analysis showed four times more formic acid in the fragments than has been recorded on previous meteorites.

The researchers told a meeting of the American Geophysical Union that the formic acid was extraterrestrial.

Formic acid is one of a group of compounds dubbed “organics”, because they are rich in carbon.

“We are lucky that the meteorite was untouched by humans hands, avoiding contamination by organic compounds that we have on our fingers,” said Dr Christopher Herd, the curator of the University of Alberta’s meteorite collection.

Samples of the meteorite totalling 850 grams were collected from Tagish Lake in Canada, purchased in 2006 by a consortium including the Royal Ontario Museum and recently subjected to chemical analysis.

The scientists found levels of formic acid four times higher than had previously been recorded on a meteorite. Studies have until recently focused on the Murchison meteorite that landed in a town of that name in Australia in 1969.

“The interesting thing is that we do see this variability between meteorites, seeming to have increased enrichments of one particular compound over another,” said Mark Sephton, a meteorite and geochemistry professor at Imperial College London.

The particular types, or isotopes, of hydrogen that are found in the formic acid show that it most likely formed in the cold regions of space before our Solar System existed.

On Earth, formic acid is commonly found in the stings of insects such as ants, but Professor Sephton said it is likely to have been an important “ingredient in the kitchen” on Earth before life began.

The acid is known to act as a “reducing agent” – acting as a magnet for oxygen atoms during chemical reactions – and facilitate the conversion of some amino acids into others.

It may also be implicated in the transformation of the more primitive RNA into DNA.

Only one of the four “nucleobases” that make up RNA and DNA is different between the two: uracil is present in RNA while thymine takes its place in DNA.

Professor Sephton’s team found uracil in the Murchison meteorite, but no measurable amount of thymine. However, formic acid is known to help along the reaction that converts the uracil into thymine.

The reaction, he said, is “one of the ways in which you can take some simple molecules and increase the chemical diversity of the pool of pre-biotic molecules”.