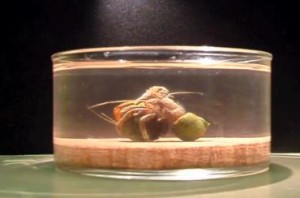 Hermit crabs have been fighting over housing since long before humans ever got involved in real estate. The crustaceans (Pagurus bernardus) make their homes in marine snail shells, and when these shells becomes too tight, the crabs bang them against the larger shells of other crabs (see video), hoping to evict them. This furious rapping is thought to represent the attacking crab’s stamina, but researchers wondered if it actually represented brawn. And indeed, as the team reports online today in Biology Letters, crabs with bigger muscles relative to their body sizes were more likely to be victorious—both at winning a shell and at resisting eviction—while muscle stamina (as judged by protein concentration) had no impact. The results suggest that muscle strength, and not endurance, is key in this war of attrition.