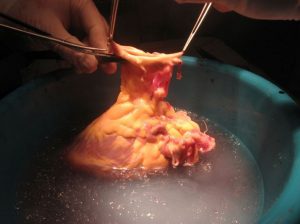 Rejection hurts, but for organ transplant patients it’s more than an emotive issue—it can be a matter of life and death. Having waited months, sometimes years, for a donor and survived major surgery, transplant patients face an uphill battle to prevent their immune systems from rejecting their new organ. Now a new test in which a transplant patient’s blood is scanned for DNA from the donor organ can alert doctors if serious rejection has begun, allowing them to try to stop the process.

Approximately 40% of transplant patients experience at least one episode of acute rejection in the first year after they receive an organ. Catching any major immunological backlash early is key to minimizing its effects, especially because most rejection episodes are reversible with a large dose of immunosuppressant drugs. But patients typically must undergo regular biopsies of their new organ to monitor its health; the procedure is both painful and expensive, and biopsies also risk damaging the organ, explains cardiologist Hannah Valantine of Stanford University School of Medicine in Palo Alto, California. In 2009, Valantine developed a noninvasive rejection test that relies on monitoring a patient’s immune system. AlloMap became the first U.S Food and Drug Administration-approved test for heart transplants, but it still fails to catch about half of rejection events.

To capture the rest, Valantine recently headed back to the drawing board. This time she enlisted help from biophysicist Stephen Quake of Stanford. Together they designed a test that relies on the fact that a transplanted organ’s genome is distinct from that of its new host. The test monitors fragments of DNA released by the organ into the blood, when cells from the transplant tissue are naturally broken down. To validate this strategy, the researchers tried their test on stored blood plasma from organ transplant patients, some of whom had had confirmed rejection episodes. During a rejection event, the levels of circulating DNA from the donor organ go up, making up on average 3% of free DNA in the recipient’s blood rather than the typical 1%, the researchers report online today in the Proceedings of National Academy of Sciences.

Valantine hopes that this test can eliminate the need for regular biopsies as a means of rejection monitoring; patients often have one every month in the first year after a transplant. Instead, physicians would perform confirmation biopsies only if the DNA test results were positive. The new test can detect “very low levels of DNA to predict rejection,” Valantine says, making this approach more sensitive than the AlloMap test. If the test can alert doctors to rejection earlier, she notes, they can “tinker” with the levels of immunosuppressant drugs rather than go in with “a big-gun approach” that lowers the patient’s immune system so much that they are at risk of infection and cancer.

Bruce Rosengard, the surgical director of the cardiac transplantation program at Massachusetts General Hospital in Boston, is cautiously optimistic about the new test. “Organ rejection remains one of the primary obstacles to transplant success,” he says. “Anything that we can do to reduce the number of heart biopsies is a very positive development. … I think this approach will gain traction pretty quickly.”

Valantine hopes to have the new test available to doctors in a year’s time, adding that she sees no reason why it can’t be used to detect rejection of other transplanted organs.