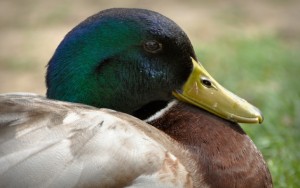 Male mallard ducks (Anas platyrhynchos) are famous for their long, spiraling genitalia. Now scientists have discovered that they have something else to crow about. Mixing duck ejaculate with a common bacteria, Escherichia coli, researchers have found that mallard duck semen kills bacteria. Semen from males with more colorful bills harbored the greatest antibacterial activity, killing up to three times more bacteria than those with duller bills, the team reports online today in Biology Letters. The finding suggests that female ducks may be drawn to brightly colored males not just because they’re more flashy, but because they spread fewer germs through sexual intercourse.