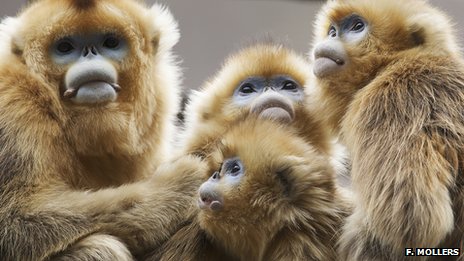 Scientists may be a step closer to understanding the origins of human social behaviour.

An analysis of over 200 primate species by a University of Oxford team suggests that our ancestors gave up their solitary existence when they shifted from being nocturnal creatures to those that are active during the day.

It is likely communal living was adopted to protect against day time predators, the researchers say.

The results are published in Nature.

From work on social insects and birds, some biologists have suggested that social groups begin to form when young do not leave their natal ground, but instead hang around and help raise their siblings.

Now, the latest evidence from primates suggests that this might not have been the case for our ancestors.

By looking at whether closely related species share similar social structures, the Oxford team of evolutionary biologists shows that a common history is important in shaping the way animals behave in a group.

The team pinpointed the shift from non-social to social living to about 52 million years ago; a switch that appears to have happened in one step, and coincided with a move into daylight.

It did coincide with a change in family dynamics or female bonding, which emerged much later at about 16 million years ago.

“If you are a small animal active at night then your best strategy to avoid predation is to be difficult to detect,” explained Oxford’s Suzanne Shultz, who led the study.

“Once you switch to being active during the day, that strategy isn’t very effective, so an alternative strategy to reduce the risk of being eaten is to live in social groups,” she told BBC News.

The link between sociality and a switch to daytime living might have been missed until now, she suspects, because biologists interested in this question have tended to work with Old World monkeys, like baboons, which are characterised by female bonded groups, which are not characteristic of many primate species.

Human societies likely descended from similar large, loosely aggregated creatures, Dr Shultz explained, but the key difference, she pointed out, is that our closest cousins’ societies do not vary within a species, while humans’ do.

“In human societies we have polygyny… we have monogamy, and in some places we have females leaving the group they were born in, and in others males leave,” she said.

Why this difference exist is still unclear.