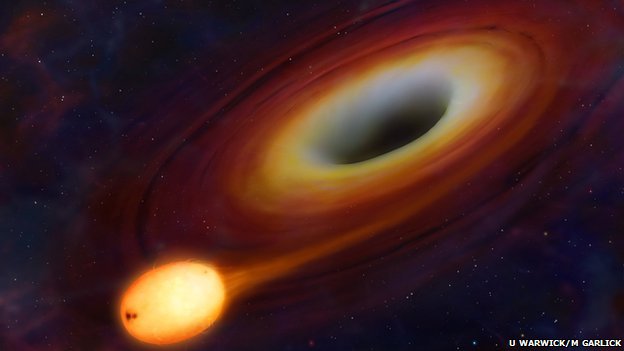 Astronomers have spied a star’s swan song as it is shredded by a black hole.

Researchers suspect that the star wandered too close to the black hole and got sucked in by the huge gravitational forces.

The star’s final moments sent a flash of radiation hurtling towards Earth.

The energy burst is still visible by telescope more than two-and-a-half months later, the researchers report in the journal Science.

The Swift spacecraft constantly scans the skies for bursts of radiation, notifying astronomers when it locates a potential flare.

These bursts usually indicate the implosion of an ageing star, which produces a single, quick blast of energy.

What intrigued the researchers about this gamma ray burst is that it flared up four times over a period of four hours.

Astrophysicist Dr Andrew Levan from the University of Warwick, and his colleagues suspected that they were looking at a very different sort of galactic event; one where a passing star got sucked into a black hole.

The energy bursts matched nicely with what you might expect when you “throw a star into a black hole”, Dr Levan told BBC News.

These black holes only become visible when an object such as a star is pulled in. If this happens, the star becomes elongated, first spreading out to form a “banana shape” before its inner edge – orbiting faster than the outer edge – pulls the star into a disc-shape that wraps itself around the hole.

As material drops into the black hole it becomes compressed and releases radiation that is usually visible from Earth for a month or so.

Events like these, termed mini-quasars, are incredibly rare – researchers expect one every hundred million years in any one galaxy.

The researchers used some of most powerful ground-based and space-based observatories – the Hubble Space Telescope, the Chandra X-ray Observatory and the Gemini and Keck Telescopes.