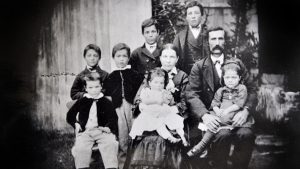 Scientists have shown that women who were first to settle in a new land had more children and grandchildren than those who followed.

Researchers analysed the family trees of French settlers who colonised Canada in the 17th and 18th centuries.

Their results could help to explain why some rare genetics diseases are common in communities established by migrations.

The findings have been published in the journal Science.

The team of researchers from Canada and Europe relied on data collected by the parish councils of Charlevoix and Saguenay Lac Saint-Jean, a region 170km north of Quebec, Canada.

The towns not only boast dairy farms, charming villages and sandy beaches but some of the best ever-kept marriage records – comprising more than a million people.

By building a picture of marriages and how many children the pairings produced, the researchers showed that woman who arrived as part of the first wave of immigration had 15% more children than those who arrived a generation later.

The pioneering woman married younger and benefited from scooping up the best local resources, they added.

But the study also found that the pioneering women’s children also had more children.

Lead author Laurent Excoffier, from the University of Bern in Switzerland, explained that the children of women at the front of the wave inherited their mother’s higher rate of fertility.

Yet, the researchers added, there was no such correlation between generations that arrived 30 years later behind the first wave.

Dr Excoffier drew parallels with cane toads. Scientists have observed that the toads at the edge of their range have bigger front legs and stronger back legs; all the better to invade new areas.

And when toads at the frontiers breed, their offspring inherit these longer, stronger limbs.

Such an effect is not unexpected, but until now no one has seen this phenomenon in humans.

“This was a rare chance to study a relatively recent human migration,” said co-author Damian Labuda, a geneticist from the University of Montreal, Canada.

Population geneticist Montgomery Slatkin from University of California, who was not involved in the work, called the study one of the “most interesting, detailed studies” he had seen.

“I think what happened [here] could easily have happened in other populations,” he added.

The findings suggest that families at the front of the wave of migration contributed more to the contemporary gene pool than those that were slower to arrive, explained Dr Labuda.

This could help explain why some rare genetic diseases are more common than expected in the Charlevoix and Saguenay Lac Saint-Jean regions.

That is because any disease causing mutations carried by people by the frontiers would be pass onto their descendents, who make up a large proportion of subsequent generations in the population.