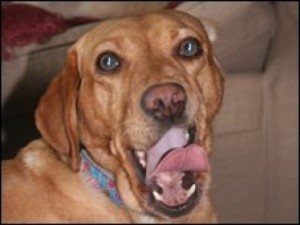 Yawning is known to be contagious in humans but now scientists have shown that pet dogs can catch a yawn, too.

The copying activity suggests that canines are capable of empathising with people, say the researchers who recorded dogs’ behaviour in lab tests.

Until now, only humans and their close primate relatives were thought to find yawning contagious.

The team – from Birkbeck College, University of London – reports its findings in Biology Letters.

Yawning, although sometimes a response to extreme stress, is more often a sign of tiredness; but the reason for why yawning is catching is not fully understood.

There is evidence that autistic individuals are less inclined to yawn into response to another human yawning, suggesting that contagious yawning betrays an ability to empathise, explained Birbeck’s Dr Atsushi Senju.

Dr Senju and his team wondered whether dogs – that are very skilled at reading human social cues – could read the human yawn signal, and set out to test the yawning capabilities of 29 canines.

The team created two conditions, each five minutes long, in which a person – who was a stranger to the dog – was sat in front of the animal and asked to call its name. Under the first condition, the stranger yawned once the dogs had made eye contact with them.

“We gave dogs everything: visual and auditory stimulus to induce them to yawn,” Dr Senju, told BBC News.

Under the second condition, the same procedure was followed, but this time the stranger opened and closed their mouth but did not yawn.

This was a precaution to ensure that dogs were not responding to an open mouth, explained Dr Senju.

The team found that 21 out of 29 dogs yawned when the stranger in front of them yawned – on average, dogs yawned 1.9 times. By contrast, no dogs yawned during the non-yawning condition.

The researchers believe that these results are the first evidence that dogs have the capacity to empathise with humans; although the team could not rule out stress-induced yawning – they hope to in future studies.

“Dogs have a very special capacity to read human communication. They respond when we point and when we signal,” Dr Senju told BBC News.

The researchers explained that along with floppy ears and big soppy-eyes, humans have selected dogs to be obedient and docile. The results from this study suggest the capacity for empathy towards humans is another trait selected in dogs during domestication.

Dr Senju thinks that these traits would have been useful to humans when they began to live side-by-side with canines approximately 15,000 years ago.