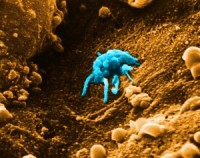 Cancers can resist destruction by drugs with the help of proteins recruited from surrounding tissues, find two studies published by Naturetoday. The presence of these cancer-assisting proteins in the stromal tissue that surrounds solid tumours could help to explain why targeted drug therapies rapidly lose their potency.

Targeted cancer therapies are a class of drugs tailored to a cancer’s genetic make-up. They work by identifying mutations that accelerate the growth of cancer cells and selectively blocking copies of the mutated proteins. Although such treatments avoid the side effects associated with conventional chemotherapy, their effectiveness tends to be short-lived. For example, patients treated with the recently approved drug vemurafenib initially show dramatic recovery from advanced melanoma, but in most cases the cancer returns within a few months.

Many forms of cancer are rising in prevalence: for example, in the United States, the incidence of invasive cutaneous melanoma — the deadliest form of skin cancer — increased by 50% in Caucasian women under 39 between 1980 and 2004. So there is a pressing need to work out how to extend the effects of targeted drug therapies. But, until now, researchers have focused on finding the mechanism of drug resistance within the cancerous cells themselves.

Settleman’s team tested 41 human cancer cell lines, ranging from breast to lung to skin cancers. The researchers found that 37 of these became desensitized to a handful of targeted drugs when in the presence of proteins that are usually found in the cancer’s stroma, the supportive tissue that surrounds tumours. In the absence of these proteins, the drugs worked well1. By growing cancer cells along with cells typically found in a tumour’s immediate vicinity, Golub and his colleagues showed that these neighbouring cells are the likely source of the tumour-aiding proteins2.

One of the most startling results of the teams’ experiments was the discovery that a protein called hepatocyte growth factor (HGF) boosts melanoma’s resistance to treatment with vemurafenib. Intrigued by this result, both teams looked at blood samples from people who had undergone treatment with vemurafenib, and found the higher a patient’s HGF levels, the less likely they were to remain in remission.

Martin McMahon, a cancer biologist at the University of California, San Francisco, who was not affiliated with either study, explains that the results have immediate implications for the design of clinical trials, which he says could combine targeted drug therapy with drugs capable of knocking down the production of proteins such as HGF.

“These papers show that the influence of the cell’s microenvironment is important not only for melanoma, but also for pancreatic, lung and breast cancer,” McMahon says, adding that they are “very exciting, because they expand the focus of where we should be looking for the mechanisms of drug resistance”.