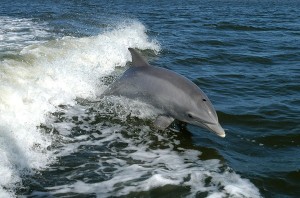 A measleslike virus appears to be the chief cause of the droves of dead dolphins that have washed ashore along the Eastern Seaboard of the United States this summer, researchers announced yesterday. Since 1 July, 333 bottlenose dolphins have been recovered from beaches between New York and North Carolina—10 times the number usually recovered at this time of year.

In early August, the large number of strandings prompted the National Oceanic and Atmospheric Administration (NOAA) to declare an Unusual Mortality Event. The declaration freed up federal funding to assist NOAA’s Marine Mammal Health and Stranding Response Program to retrieve and assess the mammals’ remains. The results of their investigation point to a type of morbillivirus as the cause of the die-off—a group that includes viruses that cause measles in humans and distemper in dogs.

The team’s detective work combined traditional techniques that examined tissues from dead animals’ lungs, brains, and lymph systems with molecular techniques to probe for the presence of the virus. So far, researchers have examined 33 dolphins; 32 have tested positive for morbillivirus. Genetic sequencing has confirmed that 11 carry the type of morbillivirus that infects only dolphins, porpoises, and whales.

“Along the Atlantic seaboard this [outbreak] is extraordinary; this is the largest outbreak that we have had since the 1987 die-off,” said Teri Rowles, head of NOAA’s Marine Mammal Health and Stranding Response Program, in a teleconference with reporters. Morbillivirus was also responsible for a devastating 1987 die-off which killed more than 700 dolphins.

Many wild dolphins exposed during that epidemic probably developed immunity to the virus, Rowles says. But a population’s immunity is slowly eroded over time; animals born since 1987 are probably susceptible, Rowles says.

The virus may have taken hold when the dolphin population reached a tipping point, with enough susceptible individuals to sustain its spread, says veterinary epidemiologist Stephanie Venn-Watson of the National Marine Mammal Foundation in San Diego, California. The epidemic will continue until the number of susceptible animals dwindles, researchers predict. There is no feasible way to vaccinate or treat the animals, they add.

It is difficult to predict how many bottlenose dolphins will ultimately succumb to the disease, and the documented strandings probably represent just a fraction of the infected animals. It is also not clear whether the virus will spread to other dolphin species. Typically, morbillivirus strains don’t spread beyond closely related species, researchers say.

As for any threat to people, “there is no indication that this virus could jump into humans,” says virologist Jerry Saliki of the University of Georgia in Athens. However, morbilliviruses suppress the immune system, so many of the washed-up animals are sick with secondary bacterial infections that are communicable to other mammals. Under some circumstances, rotting carcasses could pose a threat to beachgoers and other mammals.

NOAA plans to continue to monitor the spread of the infection and investigate whether marine pollution could be worsening the impact of the outbreak. Rowles explains that high levels of polychlorinated biphenyls, or PCBs, known to suppress mammals’ immune systems, have been reported in some areas along the eastern coastline. “We will be monitoring those areas very closely,” she adds.