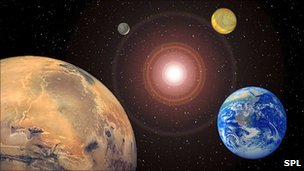 Its rapid formation could explain why the Red Planet is about one tenth the mass of Earth.

The study supports a 20-year-old theory that Mars remained small because it avoided collisions with planetary building material.

The new finding is published in the journal Nature.

In our early Solar System, well before planets had formed, a frisbee-shaped cloud of gas and dust encircled the Sun.

Scientists believe that the planets grew from material pulled together by electrostatic charges – the same force that’s behind the “dust bunnies” under your bed.

These proto-planetary dust balls grew and grew until they formed what scientists term “embryo” planets.

These rocky masses were large enough to exert a considerable gravitational force on surrounding material, including other nascent planets.

Nudging each other with their gravitational fields, the embryos were often thrown from their regular orbits, sometimes into the path of another large rocky mass.

If collisions occurred, these nascent planets were either expelled from the Solar System or shattered into pieces. These pieces were often combined to form a larger planet. In fact, the Earth’s Moon is thought to be the result of an embryo planet colliding with our own planet.

By modelling this process, astro-physicists can determine the size of planets they expect to form at a given distance from the Sun. Mars is an outlier; it should have grown to around the size of the Earth, but remains about one-tenth its size.

Because of Mars’ small size, many scientists have long suspected that the Red Planet avoided the collisions that allowed other neighbouring planets to increase their girth.

By measuring the concentration of elements Thorium and Hafnium in 44 space-rocks Dr Pourmand and Dauphas have come up with the most precise estimate of the time it took Mars to form.

Between 2 and 3 million years they suspect; short compared to the Earth, which is thought to have taken tens of millions of years to grow to its current size.

“We were pleasantly surprised because now we have precise evidence in support of the idea… that Mars is a stranded planetary embryo”, Dr Pourmand told BBC News.

He thinks that Mars was around more or less in its current size when the Earth was beginning to form.

Given this, Mars could not have experienced the same type of growth as the Earth and Venus, says Dr Pourmand.

It’s likely that Mars remains small because it deftly avoided colliding with other planets.

“The fact that Mars appears to have been left unscathed could just be down to luck,” says astrophysicist Dr Duncan Forgan of the University of Edinburgh, UK.

He explains that while it is unlikely that a planet could escape collisions for such long periods, statistically one expects it to happen from time to time.