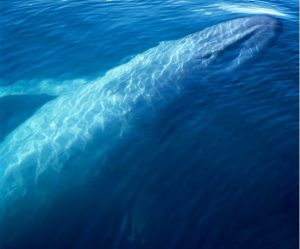 For the blue whale, feeding is an Olympic event. The largest animal on Earth dives 500 meters at speeds of up to 3 meters per second, U-turns toward the surface, and then opens its colossal mouth to scoop up clouds of krill and filter them from the water with its brushlike teeth. A new study reveals that this massive energy expenditure is worth it. Although the whales are feasting on some of the smallest creatures on the planet, the dive fills them with enough sustenance to survive.

To understand the energetics of the blue whale’s feeding behavior, Robert Shadwick, a biomechanic at the University of British Columbia in Canada, and colleagues analyzed data collected from digital tags suctioned-cupped to the whales’ back. The tags, which travel with the animal on its descent to the clouds of shrimplike krill, measure the animal’s speed, depth, orientation and the number of times it beats its tail; they then pop off and float to the surface, ready to be retrieved by pursuing biologists. Combining data from these tags with measurements of whale jaws from museum specimens, the team modeled the drag experienced by the whale as it performs its complex underwater acrobatics.

The whales use about 63,000 kilojoules of energy on each dive, the researchers report online today in The Journal of Experimental Biology. But they also eat about 1260 kilograms of krill, as calculated from the average number of krill present in the 80 metric tons of water they gulp. And that provides the whales with about 100 times more energy from the tiny creatures than they spend capturing them.

Blue whales need that extra energy because they devote such a small proportion of their lives to feeding, says Ann Pabst, a functional morphologist at the University of North Carolina, Wilmington, who was not involved with the study. She notes that the animals spend many months either migrating to and from feeding grounds or reproducing, and during these periods they must survive off their fat reserves.

Pabst adds that the new study was possible only because of new tagging technologies, which were developed by the U.S. Navy to measure pressure deep in the ocean. The tags provide so much information that “we can almost visualize what is going on at [these] depths,” she says.

The researchers hope the work aids conservation efforts. Due in part to increased human consumption of krill as fish stocks run low, blue whale numbers are only 3% of what they were in the 1800s. The data could help conservationists make a stronger argument for how much krill the whales need to survive.