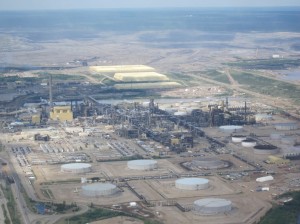 TORONTO, CANADA—German scientists have pulled out of an international research project with Canada that was attempting to find ways to minimize the environmental damage caused by exploiting Alberta’s oil sands. The move comes after political pressure forced Germany’s largest scientific organization, the Helmholtz Association of German Research Centres, to rethink its connections with an industry that many consider to be environmentally destructive.

The scientists who are part of the Helmholtz-Alberta Initiative (HAI) will no longer be involved in developing technologies that improve Alberta’s crude oil or treat the toxic effluent from the oil sands projects. Instead, the scientists will focus their efforts on the initiative’s remaining research avenues, such as carbon capture and storage and mine site reclamation.

It is a change in focus, Stefan Scherer, the managing director for the HAI, tells ScienceInsider. HAI, founded in 2011, is a partnership between the Helmholtz Association and the University of Alberta “designed to find solutions to the pressing environmental issues facing energy projects such as Alberta’s oil sands in Canada and coal production in Germany,” according to the project’s Web site. “I don’t anticipate laying off scientists,” nor will money be withdrawn from the project; the initiative is not collapsing, Scherer adds. That sentiment was echoed by a spokesperson for Alberta’s Environment Minister Diana McQueen, whose department donated CAD $25 million to the project 2 years ago.

Of the four Helmholtz institutes involved in the partnership, only one, the Centre for Environmental Research (UFZ) in Leipzig, has suspended its work in Canada. The institute’s supervisory board voted in December to impose a moratorium on UFZ’s involvement in the project. This decision is a “small hiccup”, explained Lorne Babiuk, the vice president of research at the University of Alberta and co-chair in the initiative. He added that the initiative’s focus can easily be redirected because much of the technology being developed for use in the oil sands is relevant to other carbon industries. “We will reorient the initiative,” agrees the other co-chair, Reinhard Hüttl, scientific executive director of Helmholtz Centre Potsdam. “We won’t have projects directly related to oil sands.”

The German move was in part triggered by ongoing debate over a possible amendment to the European Union’s fuel quality directive that would restrict the use of “high-polluting” oil within Europe. Germany, the largest market for fuels in Europe and the fourth largest in the world, has so far blocked the move along with the United Kingdom, but public opposition to importing Albertan oil remains high. The Canadian government has been lobbying German politicians at both the national and the European level to continue blocking the ban. That lobbying, along with Canada’s withdrawal from the Kyoto Protocol, prompted several German politicians to ask the Helmholtz Association pointed questions about the Alberta project.

“It was seen as a risk for our reputation,” Frank Messner, Helmholtz’s Environmental Research Centre head of staff, told a European news Web site. “As an environmental research centre we have an independent role as an honest broker and doing research in this constellation could have had reputational problems for us, especially after Canada’s withdrawal from the Kyoto Protocol,” he said.

An independent assessment into Helmholtz-Alberta Initiative environmental credentials will report its findings in June.