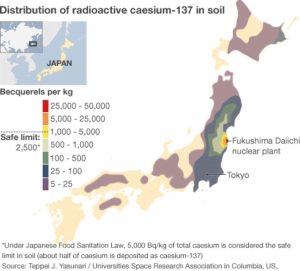 The findings provide the first comprehensive estimates of contamination across Japan following the nuclear accident in 2011.

Food production is likely to be affected, the researchers say.

The results are reported in the Proceedings of National Academy of Sciences(PNAS) journal.

In the wake of the accident at Japan’s Fukushima nuclear power plant, radioactive isotopes were blown over Japan and its coastal waters.

Fears that agricultural land would be contaminated prompted research into whether Japanese vegetables and meat were safe to eat.

An early study suggested that harvests contained levels of radiation well under the safety limit for human consumption.

Now, an international team of researchers suggests this result deserves a second look.

To estimate contamination levels, Teppei Yasunari, from the Universities Space Research Association in the US state of Maryland, and his colleagues, took measurements of the radioactive element caesium-137 in soil and grass from all but one of Japan’s 47 regions and combined these results with simulations based on weather patterns following the meltdown.

Caesium-137 lingers in the environment for decades, and so is more of a concern than other radioactive elements released in the cloud of steam when the reactors’ cooling systems failed, leading to explosions.

The team found that the area of eastern Fukushima had levels of the radioactive element that exceeded official government limits for arable land.Under Japanese Food Sanitation Law, 5,000 becquerel per kg (Bq/kg) of caesium is considered the safe limit in soil (caesium-137 makes up about half of total radioactive caesium, and therefore its safe limit is 2,500 Bq/kg).

The researchers estimate that caesium-137 levels close to the nuclear plant were eight times the safety limit, while neighbouring regions were just under this cut off; the rest of Japan was well below (averaging about 25 Bq/kg) the safety limit.

Relatively low contamination levels in western Japan could be explained by mountain ranges sheltering those regions from the dispersal of radioactive material, the authors said.

Food production in the most contaminated regions, the researchers write, is likely to be “severely impaired”, and that Fukishima’s neighbouring regions, such as, Iwate, Miyagi, Yamagata, Niigata, Tochigi, Ibaraki, and Chiba are likely to also be affected.

“Some neighbouring prefectures… are partially close to the limit under our upper bound estimate and, therefore, local-scale exceedance is likely given the strong spatial variability of [caesium-137] deposition,” the researchers explained in PNAS.

They urge the Japanese government to carry out a more thorough assessment of radioactive contamination across Japan before considering future decontamination plans.

A second study, published in the same edition of PNAS, collected over a hundred soil samples from within 70km of the Fukishima plant, and found similarly high caesium-137 levels across the Fukishima prefecture, and its neighbouring regions.

Radioecologist Nick Beresford from Centre of Ecology and Hydrology in Lancaster explained that once in soil, caesium will become bound to mineral components, which limits its uptake into plants.

However, this process depends on the soil type. “Caesium stays mobile for longer in organic soils, hence why England and Wales still have some post-Chernobyl restrictions in upland areas,” he told BBC News.

Ploughing, and some fertilisers can help farmers reduce plants’ uptake of the dangerous elements, and binding agents can be added to animal feed to reduce their uptake from the gut, he added.

Dr Konayashi saw an initial spike reaching over nine times the usual levels hours after the explosions at the plant; five months later levels have dropped to one and a half times those expected.

He continues to monitor radiation levels and distribute his data around campus.