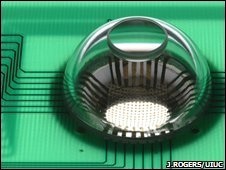 A new camera designed with a curved detection surface allows imaging devices to see as animals do.

The camera, inspired by the human eye, relies on the ability to construct silicon electronics on a stretchable membrane.

In the future, these electronic membranes could be wrapped around human organs to act as health monitoring devices, say US-based developers.

The new technology is described in a paper in the journal Nature.

Photosensitive displays – like the ones used in digital cameras – are made up of thousands of pixels and are usually formed on a flat, rigid, semiconductor wafer, explained Dr John Rogers from the University of Illinois at Urbana-Champaign, US, who led the team of researchers.

“No animal’s eyes are like that; the retina is curved,” Dr Rogers said.

“This curvature allows animals to see the world without distortion – unlike the images produced from cameras, which lose focus at the periphery.”

Hoping to improve digital imaging, the Illinois-based researcher and his team, joined up with a group of mechanical engineers from Northwestern University, to make a camera shaped more like an eye.

The challenge was to import the thin, brittle wafer-based camera technology to a curved surface. The result was a 2cm-wide camera with a single, simple lens and a concave light detection system.

The team approached the initial problem by dicing up the surface of the silicon wafer into “chiplets” – tiny pieces of silicon that detect incoming light.

Then, the world’s smallest cables, only one micron thick – the equivalent of 1/100 of the thickness of a human hair – provided the electrical connections between the adjacent chiplets to make a circuit.

Dr Rogers explained that if you squeeze the circuit, the cables allow the chiplets to move relative to each other.

Next, the team developed a curved elastic membrane.

Dr Rogers said that they had grabbed the edges of the membrane, pulling it in all directions, until taut and flat. Then the researchers dropped the mesh-like circuit of “photoreceptors” onto its surface.

“We released the membrane, let it snap back and saw that it puts all the photosensitive chips into compression,” Dr Rogers said.

“The ribbons pop-up, forming bridges between the chiplets, and so maintain the electrical connections.”

He added: “The interconnected mesh allows you to stretch, deform and reshape the circuit of photoreceptors [giving you an undistorted image].”

This is the first time anyone has moved electronics off rigid semiconductor wafers on to a fully flexible surface. The applications for this “flexible, stretchable” technology are vast, Dr Rogers told BBC News.

The photoreceptors could be swapped for any other type of receptor, and the whole circuit integrated into the human body for health monitoring.

“Look at the human body; there is nothing rigid about it,” says Dr Rogers.

His team is already developing circuits that contain electrodes, housed in the same membrane, to wrap around portions of the brain in people suffering from epilepsy, to act as an early warning system for seizure.

This technology could also be used in the heart to emit tiny electrical signals, acting as a very advanced pacemaker.