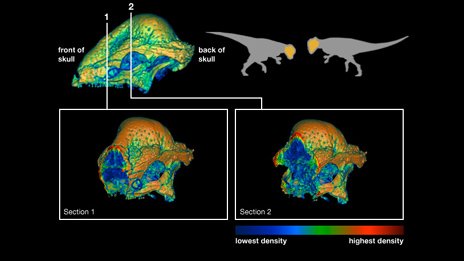 Scientists have compared a dinosaur with several modern-day animals to settle who wins the heavy-weight head-butting title.

The new findings confirm that the ancient bipedal dinosaur Stegoceras could knock out any of today’s top head-butters.

Stegoceras probably used their domed skulls to ram each other over access to fertile females.

The hard-hitting research was published in the journal PLoS ONE.

Stegoceras was a member of the leaf-eating genus Pachycephalosauria that roamed the Earth around 70 million years ago.

The goat-sized dinosaur supported a 7.5cm (~3 inches) thick bony skull, which some palaeontologists believe acted as a shock-absorber when these animals ran at each other.

However, images of the insides of Stegoceras‘ fossilised skull, which reveal two layers of dense bone that encase a spongy sinus held apart by tiny struts, has led some scientists to doubt this interpretation.

Hoping to clear up the controversy, biomedical engineer Dr Eric Snively wandered down the corridor at the University of Calgary in Alberta, Canada to enlist the help of colleague Dr Jessica Theodor, a vertebrate palaeontologist.

The duo performed computer tomographic (CT) scans on the skulls of Stegoceras, along with a variety of modern animals, and used these bone density measurements to create 3D models of the animals’ heads.

The team was then able to exert virtual stresses to test how the different skulls held up.

Compared to some of today’s big hitters, such as the Northern American bighorn sheep, the Arctic musk ox and African duiker, Stegoceras ‘ head was able to withstand the most stress.

“The argument that they couldn’t withstand the forces of head-butting seems to have been refuted by this evidence,” said Dr Theodor.

Dr Snively explained that if two animals ran at each other with a combined speed of 6.7 metres (22 feet) per second, which he estimates to be a realistic speed, Stegoceras‘ dome-head would have had to withstand an impact of over 13,000 Newtons (2,918 pounds-force).

“Even at these forces, only a few struts of bone might break; these would heal easily,” he said.

Offering further protection from these crushing collisions, Stegoceras‘ head was covered by a layer of keratin, the material nails are made from, and articulations between the vertebrae would have let the “backbone scrunch up like an accordion”, explained Dr Snively.