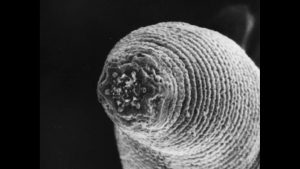 Worms have been found living at depths in the Earth where it was previously thought animals could not survive.

Discovered in South African mines, the roundworms can survive in the stifling 48C (118F) water that seeps between cracks 1.3km beneath the Earth’s crust.

The find has surprised scientists who, until now, believed only single-celled bacteria thrived at these depths.

Writing in the journal Nature, the team says this is the deepest-living “multi-cellular” organism known to science.

The researchers found two species of worm. One is a new species to science, which the scientists have named Halicephalobus mephisto after Faust’s Lord of the Underworld.

The other is a previously known roundworm known as Plectus aquatilis.

Until now, only single-celled organisms, like bacteria and fungi, have been recovered from kilometres beneath the Earth’s crust. The lack of oxygen is thought to stymie attempts by anything larger to make its home there.

But this has not stopped scientists looking.

The Earth’s subterranean world is only accessible to researchers in a handful of places worldwide where ore-mining requires drilling to reach depths of more than 3km.

Taking advantage of two such sites – the Beatrix and Driefontein gold mines in South Africa – the international team of researchers placed filters over the mines’ bore-holes through which thousands of litres of groundwater pour.

From these samples they usually recover only bacteria; so the worms were a surprise.

“It scared the life out of me when I first saw them moving,” said geo-microbiologist Dr Tullis Onstott of Princeton University in New Jersey, US.”They look like black little swirly things,” he added.

These worms seem capable of surviving in very low levels of oxygen – at 1% of the levels found in most oceans, explained Dr Onstott.

But how did the worms get there?

The water in which the worms were found is between 3,000 and 10,000 years old, and so it is unlikely that the researchers brought the worms with them into the mines.

The scientists, for now, believe that the animals originally came from the surface but got washed down into the cracks in the Earth’s crust by ancient rainwater.

Dr Gaeten Borgonie, a member of research team, explained that he thinks the animals look very much like the tiny worms that live in rotting fruit and soil at the surface, and probably descended from them.

Worms at the surface experience great extremes of temperature and can survive being frozen and thawed, dehydrated and re-hydrated, he told BBC News.

Dr Borgonie believes that worms already have some of the “attributes necessary” to survive at these great depths. So it wasn’t a surprise to him that the first multicellular organism to be found in the deep subsurface of the Earth was a worm.

The authors of the study expect to find other multicellular animals far beneath our planet’s surface, and are preparing to descend again to search for others.