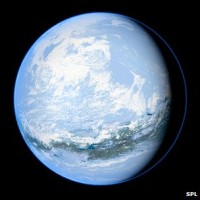 The researchers said people should still expect to see “drastic changes” in climate worldwide, but that the risk was a little less imminent.

The results are published in Science.

The study is the latest to derive a value for “climate sensitivity” – the temperature rise for a doubling of CO2 concentrations – from palaeontology.

Previous studies have produced a mean value around 3C; but the new analysis concludes it is somewhat lower, around 2.3C.

Given that no one is doing very much around the planet [about] mitigating CO2 emissions, we have a bit more time

More accurate analyses of climate sensitivity from historical data should allow for development of more accurate climate models that forecast the future.

The new analysis uses palaeoclimate data going back to the latter stages of the most recent Ice Age, 21,000 years ago, and a computer model.

Lead author Andreas Schmittner from Oregon State University, US, explained that by looking at how surface temperatures changed during a period when humans were having no impact on global temperatures, his team showed that it had not been as cold as previous estimates had suggested.

“This implies that the effect of CO2 on climate is less than previously thought,” he explained.

The researchers suggest that this finding can reduce uncertainty in future climate projections, though they do still give a range rather than a precise value.

The new models predict that given a doubling in CO2 levels from pre-industrial levels, the Earth’s surface temperatures will rise by 1.7C to 2.6C (3.1F to 4.7F), with a mean value of 2.3C.

That is a much tighter range than the one produced by the Intergovernmental Panel on Climate Change’s (IPCC) 2007 report, which suggested a rise of 2.0-4.5C, with a mean of about 3C.

The authors stress the results do not mean that the threat from human-induced climate change should be treated any less seriously, explained palaeoclimatologist Antoni Rosell-Mele from the Autonomous University of Barcelona, a member of the team that came up with the new estimates.

But it does mean that to induce large-scale warming of the planet, leading to widespread catastrophic consequences, we would have to increase CO2 more than we are going to do in the near future, he said.

“But we don’t want that to happen at any time, right?” he remarked

“At least, given that no one is doing very much around the planet [about] mitigating CO2 emissions, we have a bit more time.”

Whether these results mean that the global temperatures would be less responsive to falling CO2, if emissions do fall, is unclear.

“I don’t think we know that, to be honest,” remarked Dr Rosell-Mele.

Gabriele Hegerl from the University of Edinburgh is cautious about the result in her perspective piece published in the same issue of Science.

She says that this is just one particular climate model, and “future work with a range of models would serve to strengthen the result”.

Climatologist Andrey Ganopolski from the Potsdam Institute for Climate Impact Research, Germany, went further, saying he would not make such a strong conclusion based on this data.

“The results of this paper are the result of the analysis of [a] cold climate during the glacial maximum (the most recent ice age),” he told BBC News.

“There is evidence that the relationship between CO2 and surface temperatures is likely to be different [during] very cold periods than warmer [periods].”

Scientists, he said, would therefore prefer to analyse periods of the Earth’s history that are much warmer than now when making projections about future temperatures.

However, although good data exists for the last million years, temperatures during this time have been either similar to present, or colder.

“One should be very careful about using cold climates to [construct] the future,” he added.