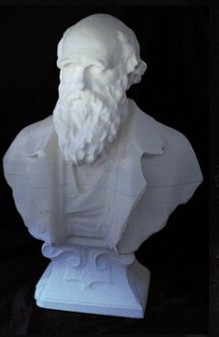 LONDON—The votes are in, and the top prize in a contest to redesign a bust of Charles Darwin goes to a floating crocheted head of the eminent naturalist created by Cristina Amati, a graduate student at University College London (UCL). The contest, whose winner was announced today to mark the 205th anniversary of Darwin’s birth, was set up by UCL to fill a void created by the relocation of the original bust of the naturalist. Along with the winner, the empty pedestal inspired six other zany sculptures depicting the famed naturalist, which include his face fashioned from the pages of his seminal book, The Origin of Species; a likeness molded from transparent nutrient-enriched gel through which ants will be enticed to tunnel; and an inch-tall bust containing a USB flash drive. The competition’s seven entries—on display in a 7-week-long exhibition at the Grant Museum of Zoology in London, starting on 12 February—are all based on 3D scans of the original plaster bust.