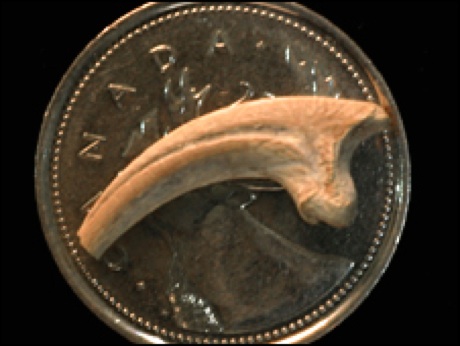 The smallest meat-eating dinosaur yet to be found in North America has been identified from six tiny pelvic bones.

Hesperonychus was the size of a small chicken, and used its rows of serrated teeth to feed on insects, experts say.

The bird-like creature is closely related to Microraptor – a tiny feathered dinosaur discovered in China.

The specimen helps to confirm that reptiles, and not mammals, filled the role of small predators during the age of the dinosaurs.

The fossil skeleton, which lay misidentified for 25 years as a lizard, belongs to a group of dinosaurs called the theropods – bipedal reptiles that eventually gave rise to birds.

“Despite the discovery of exquisitely preserved skeletons of small bird-like dinosaurs in Asia, they are exceedingly rare in North America,” explained Dr Philip Currie, a palaeontologist from the University of Alberta and co-author on the paper.

Dr Currie had been pondering why so few small fossils have been unearthed in Alberta, Canada – one of the world’s richest sites for large-dinosaur bones.

He suspected that small dinosaurs did not preserve well in the region of the prevalence of larger predators in the area.

“There were many large dinosaurs running around eating them, and small bones are easily washed away by rivers [common in this region during the Cretaceous period]”, Dr Currie said.

The new find casts more doubt on whether mammals would have acted as small predators in Cretaceous-era North America. The fossilised pelvis came from an animal that weighed no more than 1.9kg (4.2lb) and appears distinctively reptilian.

“This tells us that [as in Asia], North American dinosaurs likely out-competed mammals for both large and small predator niches,” Dr Currie told BBC News.

The authors also suggest this discovery helps to resolve debate over whether flight originated from animals that ran on the ground, flapping their arms, or whether it started with tree-climbing animals gliding downwards.

Based on the size of the hips, and because one of the hip bones was bent – the pubis, a small bone that sits between the legs – “we know this dinosaur was a tree-climber”, Dr Currie explained.

“It likely used the long feathers on its limbs to glide or parachute from tree to tree.”

The specimen, Hesperonychus elizabethae – named after its collector Dr Elizabeth Nicholls – was reclassified by palaeontolgist Dr Nicholas Longrich, a co-author of the paper, from the University of Calgary.

The findings were reported in a recent article in the journal Proceedings of National Academy of Sciences.