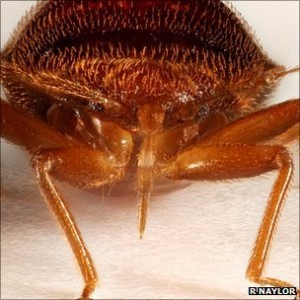 Bacteria covering bed bugs’ bodies are transmitted to the female, along with the sperm, during mating.

The new work shows that without the protection of antibacterial agents in the bug’s ejaculate, 40% of sperm die.

The results were presented at the 13th Congress of the European Society for Evolutionary Biology.

Bed bugs, and the related bat bugs that live in African caves, are renowned for their bizarre sex lives.

Males, instead of penetrating the female’s vagina, pierce her underside and deposit sperm inside the female, where it swims through the insect’s blood system to the ovaries to fertilise the eggs.

Female bed bugs protect themselves against the diseases that males transmit with a structure on their bellies that guides the penis into a mass of germ-fighting cells.

Males, it seems, have also evolved a way to fend off the effects of sexually transmitted infections, evolutionary biologist Oliver Otti from the University of Sheffield, UK, told conference attendees in Germany.

Wounding is a very frequent event during and after copulation, and generally genitals are not that clean

Suspecting that males load their ejaculates with proteins that protect sperm, Dr Otti carefully extracted sperm from a number of male bed bugs, being sure not to mix it with the seminal fluid that usually makes up the rest of the ejaculate.

He then mixed the sperm with a “soup” of micro-organisms that he had collected from the outer skin of the bed bugs.

To half of these samples he added lysozyme, a bacteria-killing enzyme known to be active in bed bugs, and saw that 40% more sperm survived in its presence.

Females didn’t gain any protection from these introduced bacteria-busting enzymes, he explained; the presence of lysozyme in the ejaculate seemed to be purely to protect sperm.

But other work by Dr Otti’s colleague Michael Siva-Jothy, who is also based at the University of Sheffield, shows that females protect themselves from the infections introduced during sex with their own lysozymes.

In fact, females ramp up their lysozyme activity just before they are about to feed. Dr Siva-Jothy explained that this is probably because in the bed bug world, feeding is generally always followed by mating.

“Wounding is a very frequent event during and after copulation, and generally genitals are not that clean, ” Dr Otti told BBC News.

He explained that the research that has focused on human sexual transmitted diseases has tended to ignore the microbes that coexist with us on our skin; these microbes are likely also transferred during sex.

“It is not clear what the cost of having them around is,” Dr Otti added.

The advantage of studying bed bugs, he said, is that we share many components of our immune system. As a result, scientists can learn much from manipulating the bugs’ sex lives to study the consequences on lifespan and offspring production – some of these trade-offs could be relevant to humans.