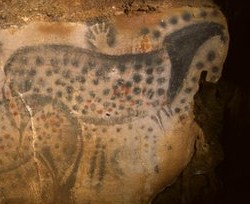 Scientists have found evidence that leopard-spotted horses roamed Europe 25,000 years ago alongside humans.

Until now, studies had only recovered the DNA of black and brown coloured coats from fossil specimens.

The findings are published in the Proceedings of the National Academy of Sciences.

Horses, which were the most abundant large mammal roaming Eurasia 25,000 years ago, were a key component of early European diets.

So it is not surprising that the cave art of this time had a certain equestrian flair – horses make up 30% of the animals depicted in European cave paintings from this era.

Biologists, interested in the diversity of European animals before the last Ice Age, are interested in how accurately these early artistic impressions portrayed the colouring of the horses that lived alongside the ancient humans.

“It was critical to ensure that the horse depictions from the cave paintings were based on real-life experiences rather than products of the imagination,” explained lead author Arne Ludwig from The Leibniz Institute for Zoo and Wildlife Research in Berlin.

In previous work, Dr Ludwig, and his colleagues, recovered only the DNA of black and brown coat colours from the prehistoric horse bones.

But the dappled coats of the 25,000 year horses depicted at the Pech Merle cave complex in France convinced the team to take a second look.

By revisiting the fossil DNA of 31 horse specimens collected from across Europe, from Siberia to the Iberian Peninsula, the researchers found that six of the animals carried a mutation that causes modern horses to have white and black spots.

Of the remaining 25 specimens, 18 were brown coloured and six were black.

Dr Ludwig explained that all three of the horse colours – black, brown and spotted – depicted in the cave paintings have now been found to exist as real coat-colours in the ancient horse populations.

The researchers say that these three colours probably provided enough variation for humans to create the diversity of coat colours and patterns seen in modern horses.

The domestication of horses, which produced modern breeds, is thought to have begun about 4,600 years ago in the steppe between modern Ukraine and Kazakhstan.