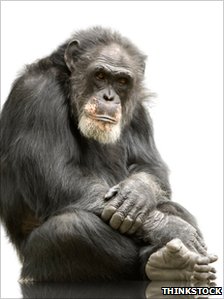 The brains of our closest relatives, unlike our own, do not shrink with age.

The findings suggest that humans are more vulnerable than chimpanzees to age-related diseases because we live relatively longer.

Our longer lifespan is probably an adaptation to having bigger brains, the team suggests in their Proceedings of the National Academy of Sciences paper.

Old age, the results indicate, has evolved to help meet the demands of raising smarter babies.

As we age, our brains get lighter. By 80, the average human brain has lost 15% of its original weight.

People suffering with age-related dementias, such as Alzheimer’s, experience even more shrinkage.

This weight loss is associated with a decline in the delicate finger-like structures of neurons, and in the connections between them.

Alongside this slow decline in its fabric, the brain’s ability to process thoughts and memories and signal to the rest of the body seems to diminish.

Researchers know that certain areas of the brain seem to fare worse; the cerebral cortex, which is involved in higher order thinking, experiences more shrinkage than the cerebellum, which is in charge of motor control.

Yet despite the universality of ageing, scientists do not fully understand why our brains experience this continuous loss of grey matter with age.

Intriguingly, the brains of monkeys do not seem to undergo the same weight loss, raising the question of whether it is a distinctively human condition.

Now, a team of neuroscientists, anthropologists, and primatologists have pooled their expertise and datasets to reveal the answer.

Comparing magnetic resonance images from more than 80 healthy humans between the ages of 22 and 88 with those of a similar number of captive-bred chimps, the researchers found that chimps’ brains do not shrink with age.

The results suggest that the estimated 5-8 million years of evolutionary history that separate chimps from humans have made all the difference in the way that the species age.

It takes a village…

Anthropologist Chet Sherwood from George Washington University in Washington DC, who led the study, thinks that humans live longer to “pay for” their larger-brained children.

Humans live relatively long compared to other great apes. The majority of this extended life is post-menopausal, while chimps are reproductively viable right up to their death.

A human brain is three times the size of chimpanzee’s.

And it is not such a stretch, Dr Sherwood suggests, to conclude that grandparents’ extended lives are in an evolutionary sense there to relieve mothers from being solely responsible for raising their big-brained, energetically costly infants.

“I say this right now, as my seven year old daughter is being looked after by my mother,” he told BBC News.

“Because neurons cannot regenerate, aging, he thinks, is just the stress of living long enough to lend a helping hand to some relatives.”

“[The study] provides very good evidence that the patterns of brain ageing in humans are quite different from other animals,” commented neuroscientist Tom Preuss from Emory University in Atlanta, US, who was not involved in the research.

However, Dr Preuss was clear that these differences do not make other animals useless as models for studying age-related diseases.

Instead, the differences could help to explain why humans suffer more from these diseases than other animals seem to.