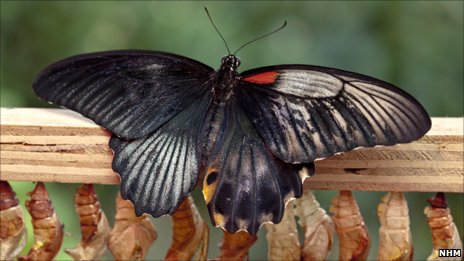 A line down the insect’s middle marks the division between its male side and its more colourful female side.

Failure of the butterfly’s sex chromosomes to separate during fertilisation is behind this rare sexual chimera.

Once it has lived out its month-long life, the butterfly will join the museum’s collection.

Only 0.01% of hatching butterflies are gynandromorphs; the technical term for these strange asymmetrical creatures.

“So you can understand why I was bouncing off of the walls when I learned that… [it] had emerged in the puparium,” said butterfly enthusiast Luke Brown from London’s Natural History Museum.

Mr Brown built his first butterfly house when he was seven, and has hatched out over 300 thousand butterflies; this is only his third gynandromorph.

It is not only the wings that are affected, he explained. The butterfly’s body is split in two, its sexual organs are half and half, and even its antennae are different lengths.

“It is a complete split; part-male, part-female… welded together inside,” he told the BBC.

The dual-sex butterfly is an example of a Great Mormon, Papilio memnon –a species that is native to Asia.

With a shortage of butterfly-specific gender neutral pronouns, the butterfly is being referred to as “it”, and is already middle-aged at three and a half week’s old.

So the public has only a narrow window of opportunity to see it alive.

Though rare, gynandromorphy isn’t unique to butterflies; individual crabs, lobsters, spiders and chickens have all been found with a mix of two sexes.

There are likely many more cases in the natural world, but sexual chimeras are more difficult to spot in animals where females and males look alike.