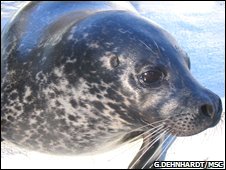 Seals can identify a single star in the night sky and navigate by it, scientists have discovered.

Navigating in the open ocean is essential for seals to move between foraging grounds that may be hundreds of kilometres apart.

This is the first evidence that marine mammals, like humans, use stars to navigate in open water, say scientists.

The European team has published details of its work in the journal Animal Cognition.

The researchers, headed by Dr Guido Dehnhardt of University of Rostock in Germany, simulated a night sky above two captive male seals and monitored the movements of the animals through six hidden infrared cameras.

“Initially, the seals were guided to one of the brighter stars by a laser pointer, and encouraged to swim towards it,” said Bjorn Mauck of the University of Southern Denmark and one of the team-members.

Once the seals got the hang of navigating by the one star, the night sky above them was swivelled around and the seals were watched to see if they could still orientate themselves.

“With a little practice the seals swam in the right direction 100% of the time,” said Dr Mauck.

In the wild, seals’ foraging trips can take several days and so they often find themselves in open water with no visible landmarks for nights on end. How these wild seals learn the relationship between a star and their feeding ground is still unknown.

“Seals might learn the position of the stars relative to foraging grounds during dawn and dusk when they can see both the stars and landmarks at the coast,” suggests Dr Mauck.

The researchers think that marine mammals might use star paths, or “kaveingas” as Polynesian seafarers call them.

These people navigate by heading towards a star on the horizon until it moves too high to see, and then swap over to follow another star, and so on, guiding their way until dawn.

Seals, sealions and whales are often seen elevating themselves out of the water as they swim in open ocean. This act of coming out of the water vertically and staying above the surface momentarily, in the same way a human treads water, could allow marine mammals to set their course, the researchers speculate.